Commodities showed broad-based gains during a week that was driven by central bank action or perhaps (as it turned out) no action at all. The "hawkish no hike" from the Federal Open Market Committee helped trigger a strong recovery in riskier assets as the dollar weakened once again.

The Bloomberg Commodity index recorded its best week in five with metals both precious and industrial rallying strongly.

Despite a renewed surge in supply, oil markets bought into the idea that Opec and Russia may reach an agreement in Algiers on September 28. Silver surged while gold looked in no hurry to break out of its three-month range.

Dwindling supply sent sugar and coffee surging (before running into profit-taking) while key crops such as corn and wheat struggled as the US harvest season kicked off. 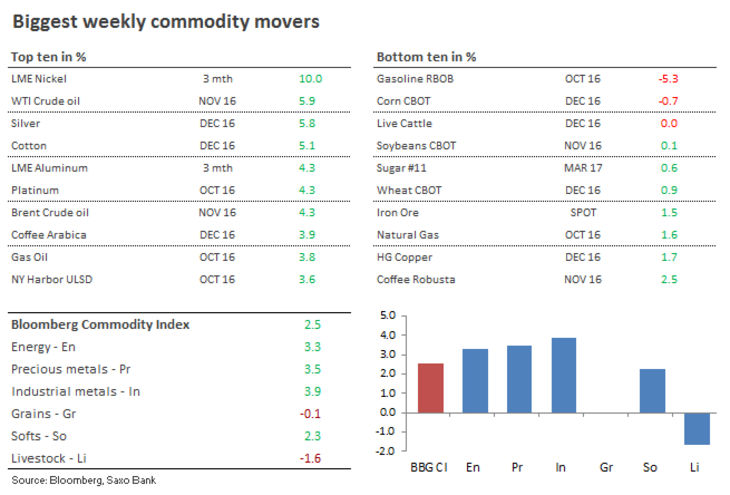 Worries about dwindling supplies have supported strong surges in both sugar and coffee. Raw sugar futures reached a four-year high and Arabica coffee a 19-month high before turning lower as the Brazilian real fell back and hedge funds holding very elevated net-long positions booked some profit.

Sugar has surged by 40% this year while Arabica Coffee is up by 14% after having traded sideways for the best part of two years.

During the past couple of months, both corn and wheat have made several attempts to recover from multi-year lows. A weaker dollar helped support a renewed attempt this week, but pressure from the US harvest and receding weather worries sapped strength from the market.

The FOMC opted to stay on hold for longer with the market now delaying its rate hike expectations until December – if it still expects one at all. Precious metals bounced on the news, but the failure to break higher despite the tailwinds from a weaker dollar and lower bond yields shows the current struggle to re-ignite the rally.

Gold has increasingly gone stale over the three months following the Brexit vote. Investors have stepped to the sidelines while waiting for a deeper correction or an event that could bring the market back to life and help mount a fresh challenge at the key resistance level of $1,375/oz.

So far, such an event has failed to materialise and gold has traded back to $1,335/oz, this being the average price during the past three months.

There has been no change in total ETP holdings for the past two months following a near 40% rise earlier in the year. Hedge funds, meanwhile, have held an unchanged (but still near-record) bullish bet for the past three months.

Combining the two investor groups, we find that total holdings in gold (at 2,730 tonnes) are only 13% below their 2012 peak, not least due to the record position being held by tactical traders in the futures market.

The nominal value at $127 billion, however, is still some 35% below the peak. 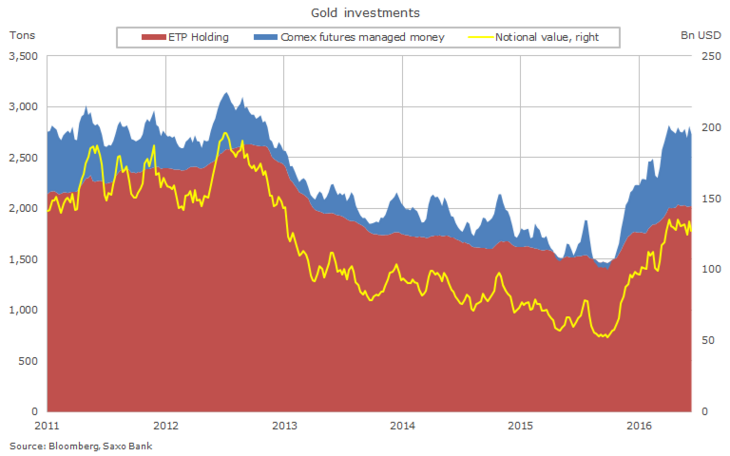 Gold investments through futures and ETP

Gold has traded between two converging trendlines since June 24 with its support at $1,310/oz and resistance at $1,347/oz. We maintain a positive medium-term outlook for gold, but a deeper correction and test below $1,300/oz may be needed in order to attract increased demand from long-term investors through exchange-traded products.

Likewise, a break above $1,375/oz could trigger an extension towards $1,485/oz as it would signal that the downtrend in place since 2011 has finally been broken. 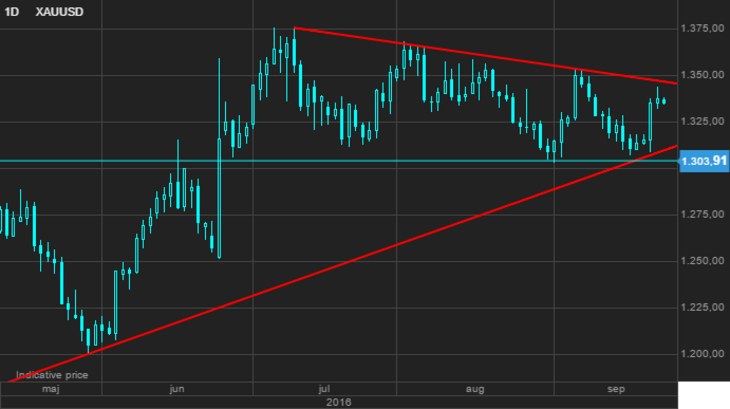 Just as with gold, the oil market remains locked in a range with the pressure from oversupply being offset by renewed hope that Opec and Russia may reach an agreement to cut production.

Opec members will meet on the sidelines of the International Energy Forum, which groups producers and consumers in Algeria from September 26-28. Non-Opec producer Russia will also attend the forum.

After recording four days of gains, both WTI and Brent crude oil succumbed to profit-taking ahead of the weekend. A third weekly reduction in US inventories, a weaker dollar, and renewed verbal intervention from producers ahead of the Algiers gathering helped offset bearish news on the supply front.

According to this Bloomberg article, September has seen a rise in production of more than 800,000 barrels/day from Nigeria, Libya, and not least Russia which said its reached a new record of more than 11 million b/d this month. Rising production into an already oversupplied market is the challenge that troubled oil producers have to address when they sit down face to face.

Back in April a meeting in Doha failed to curb supply, which was due in part to Saudi Arabia's insisting that a deal could not be done without Iran also participating.

Fast forward almost six months and Iran has now reached its pre-sanctions production levels and that has raised speculation that some kind of deal can be hammered out. Representatives from Saudi Arabia and Iran met in Vienna ahead of the meeting and it apparently resulted in Saudi Arabia offering to cut production in exchange for Iran promising to freeze output.

Saudi Arabia produced around 10.2 million b/d during the first five months only to see it surge to a record in July at 10.67 million b/d. Offering a cut from those elevated levels, at a time of year where the seasonal production tend to slow anyway, looks like a smart move, but it still needs the unlikely acceptance by Tehran.

With US production having stabilised during the past two months the pressure on Opec to support the market has grown, particularly considering that the prolonged oversupply has been driven by rising production among its own members.

We maintain the view that the upside remains limited until we see clear signs of the glut being reduced. A deal to cut production may trigger a speculative rush of buyers but once again, the low 50s in Brent crude oil should once again provide strong resistance.

Failure to act would return the focus to the aforementioned jump in production which carries the risk of seeing Brent crude trade below recent support at $45/b, potentially targeting $40/b.

Brent crude has so far been averaging $47.70/b this quarter, more or less in the middle of our $45 to $50/b target range. A "no deal" in Algiers could see the range being extended to the downside while a deal, depending on the content, may prompt a short term rally above $50/b. 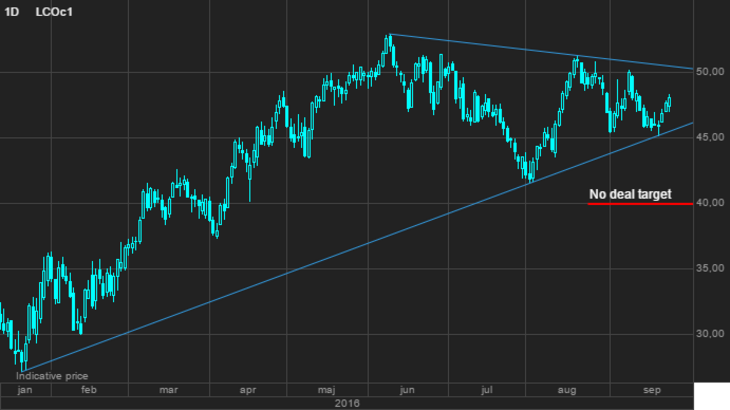 Commodities pause as the dollar rises