It has been another crazy week on the political and financial market front. Donald Trump's unexpected win on Tuesday sent shockwaves across global markets with everything from currencies and stocks to commodities and particularly bonds trying to work out what the future now holds.

Perhaps it's best to kick off this weekly update by taking a look at some of the major market developments since Tuesday night, before polling stations began to close across the US. The single biggest development since the result became known was Trump's pledge to open up the public purse with over $500 billion earmarked for infrastructure projects branded as the "rebuilding of America".

The combination of increased fiscal spending and tax cuts helped to send US bond yields sharply higher as it increased funding pressure and also lifted inflation expectations. During the past couple of days, the bond selloff has spread from developed to emerging markets as the years of cheap dollar funding looks set to come to an end. 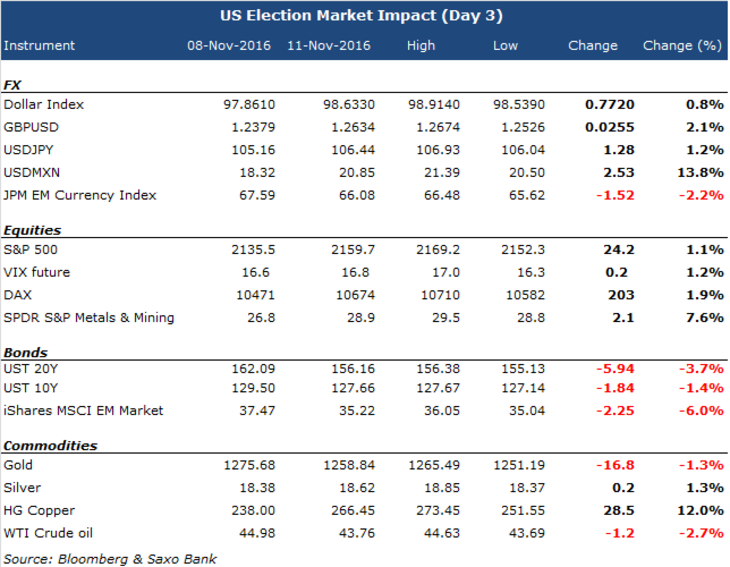 Market movements since the US election

The commodity space was gearing up for a Clinton victory and that led the market to believe that the next four years would be more of the same. A Trump victory had – wrongly, it turns out – been expected to lift gold and hurt growth-dependent commodities such as industrial metals.

That assumption turned out to be completely wrong as the pre-election focus had been more on Trump's personality rather than the market implications of his stated policies. 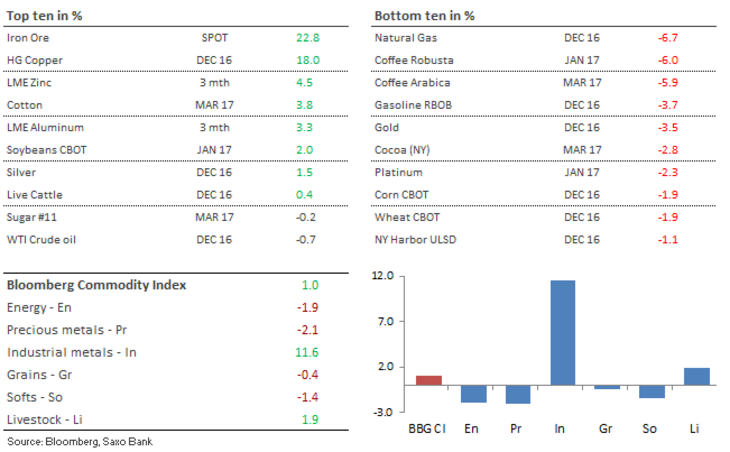 Instead of seeing gold break the downtrend from 2011, it was instead copper which surged higher to record its biggest weekly gain in decades.

Chinese data improvements, Trump's pledge to invest in infrastructure, and the surge in speculative demand seen on exchanges from New York to London and particularly Shanghai have all helped drive copper to a 16-month high. This comes after the industrial metal has been trading sideways for the past year as rising supply kept hitting a market characterised by faltering demand.

The gains following the election result alone have been in the area of 13%. Ultimately, it was copper and not gold that broke its five-year downturn to record its best week in decades.

Gold whipsawed on Wednesday following Trump's surprise victory. In the run-up to the election a Trump win was seen as gold-positive because of the heightened uncertainty it ostensibly entailed. Just as with the unexpected Brexit result back in June, gold began taking off while stocks and the dollar dropped as the state-by-state results started to emerge.

Gold surged past resistance at both $1,308/oz and $1,328/oz, but before Trump's win had even been officially confirmed, most markets began reversing. In his acceptance speech, Trump struck a conciliatory tone while highlighting his call to rebuild America through increased spending on infrastructure.

Gold ended up doing a $70 round trip with record trading volumes on the Comex futures exchange before finishing the day almost unchanged.

The rise in bond yields is not good for gold unless accompanied by a similar rise in inflation. The chart below shows that the move so far in 10-year bond yields has seen the real yield rise to 0.25% – the highest level since June.

Rising US bond yields and the brewing emerging markets crisis has seen strong demand for dollars post- the election, and this marks yet another gold-negative development. 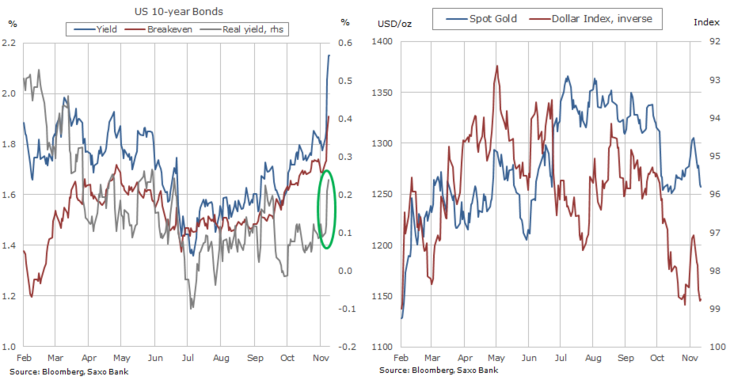 The surging demand for copper and other industrial metals lent support to semi-precious silver and this helped trigger an outperformance of nearly 5% this past week while the gold/silver ratio fell to a three-month low.

Gold is once again challenged by the events of the past couple of days. Headwinds will be seen until we see markets, including bonds and the dollar, stabilise. Trump has yet to unveil details about his plans for the next four years and heightened market uncertainty once they become available may help provide gold with a renewed safe-haven bid.

Investment demand through exchange-traded products will once again provide an important gauge as to how longer term investors view gold following this week's financial earthquake.

Gold's spectacular failure to hold onto its initial gains and the subsequent headwind from rising bond yields and dollar could see it once again test key support at $1,250/oz. A break below this level will put $1,211/oz into focus – this being the halfway mark of the rally seen over the past 11 months. 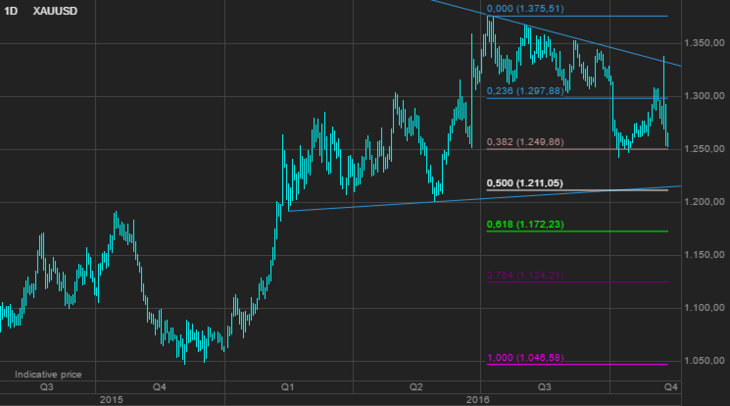 Crude oil remains caught in a perfect storm of negative news and with every drop in the price, the pressure on Opec to deliver a sizable production cut grows. Apart from the US election result on Wednesday, which initially took prices down by almost 5% before recovering, inventory and production news provided additional pressure.

In its latest weekly petroleum status report, the US Energy Information Agency said that crude oil inventories rose by more than expected for a second week. Production estimates, meanwhile, showed a 170,000 barrel/day increase, the biggest weekly jump since May of last year. 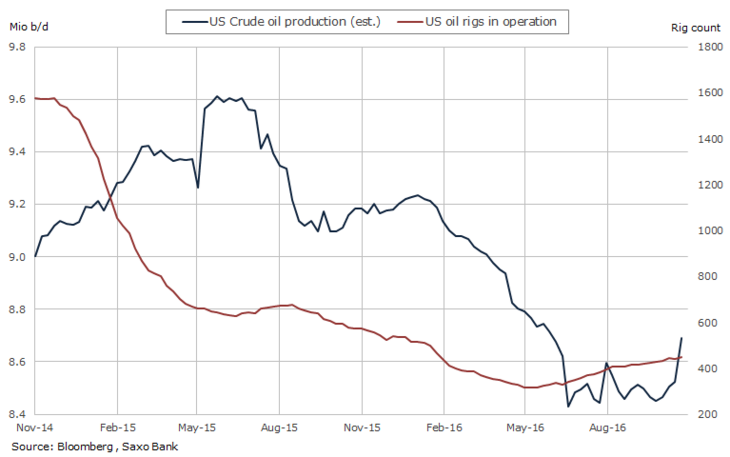 US oil rig count and production

Within Opec, Iran came out saying that it had increased October production by 210,000 b/d, the biggest monthly increase since sanctions were lifted and more than the previous five months combined as per a Bloomberg report. Potentially this in an attempt to join the Opec deal by announcing a production freeze at a level somewhat above where secondary sources currently see its production.

As Trump moves into the White House, the oil market will be waiting to see which of his oil-sector pledges he will attempt to carry out. The most significant of these has been his threat to scrap the nuclear deal with Iran and re-introduce sanctions, which could make it very difficult for Iran to attract the foreign investment and know-how needed to further expand its industry.

Opec is undoubtedly in a race against the clock to come up with a workable solution. Given the negativity currently hanging over the market, any failure to deliver a robust deal carries the risk of sending oil back below $40/b.

Back at the Algiers meeting in September, the cartel was looking to cut production by enough to help lift the price back towards $60/b; the most they can probably hope for now is to see it return towards $50/b.

Brent crude, which has been averaging $48/b for the past seven months, is once again under pressure with supply continuing to rise while demand growth is called into question. Any failure by Opec to reach a deal before November 30 could see a renewed test of $40.40/b while even given a deal, the market may struggle to move much higher than $50/b. 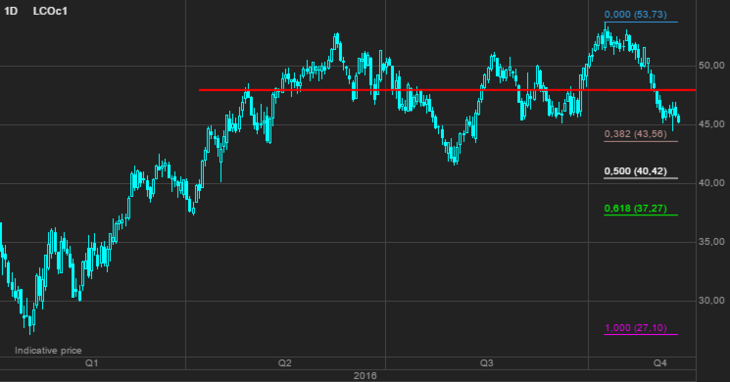 A Danger Can Hide Another
Related articles
Risk Academy