A four-week commodity rally has come to a halt as the dollar continues to strengthen. The euro, the world's most actively traded currency against the greenback, dropped below €1.09 to hit its weakest level since March. Similar dollar strength was seen against a basket of Asian currencies.

Expectations of a December Fed rate hike on rising inflation expectations (the odds are up to 68% from just 12% back in July), combined with continued stimulus from the European Central Bank and the Bank of Japan, have supported the recent dollar strength. The Chinese yuan, meanwhile, has hit a six-year low on signs that China is prepared to let the currency weaken further in response to a tumble in exports.

The Bloomberg commodity index which tracks a basket of major commodities was down 0.5%, almost the same amount the dollar rose against a basket of currencies. 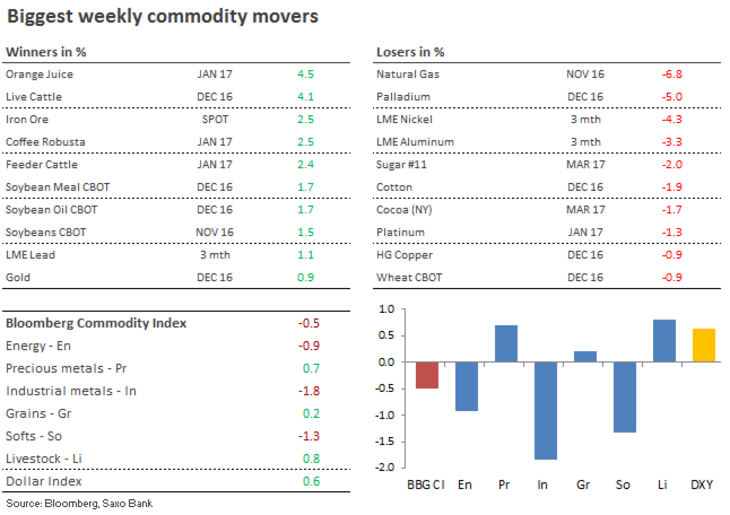 Further weakness in HG copper below $2.085 would confirm a breakdown from the symmetrical triangle that has developed in copper prices throughout 2016. It is the lower boundary of this pattern that is currently being tested and a break could see HG copper target the 2016 low at $1.97. The recent weakness has happened in response to the dollar’s rise and weak industrial production and imports data from China. 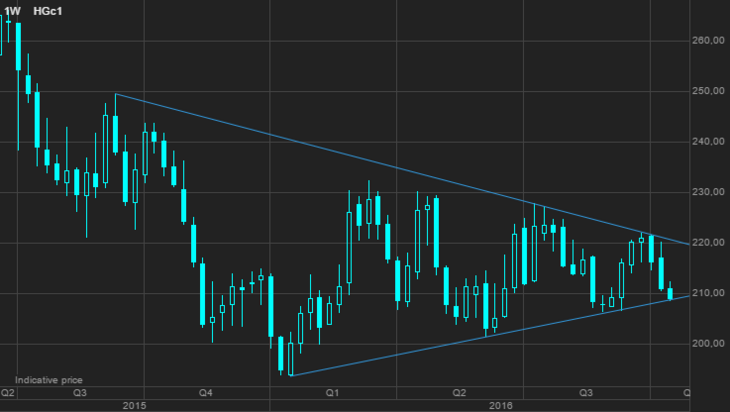 The energy sector was pulled lower by weaker natural gas prices while the month-long oil rally came to halt. The market has now priced in a successful outcome of the Opec-led initiative to cut production in order to stabilise the price. Details about who will cut production and by how much will be announced at the next Opec meeting on November 30.

Precious metals continued to stabilise following the early October selloff with gold trading sideways for a second week as heavy selling pressure from funds began to fade. The positive impact from rising physical demand from China and India as well as continued accumulation of holdings through exchange-traded products, continued to be offset by the rising dollar.

Hedge funds have maintained a relatively stable exposure to commodities during the past month with a big rise in oil exposure and short-covering in grains being offset by a sharp reduction in metal exposure, not least gold. 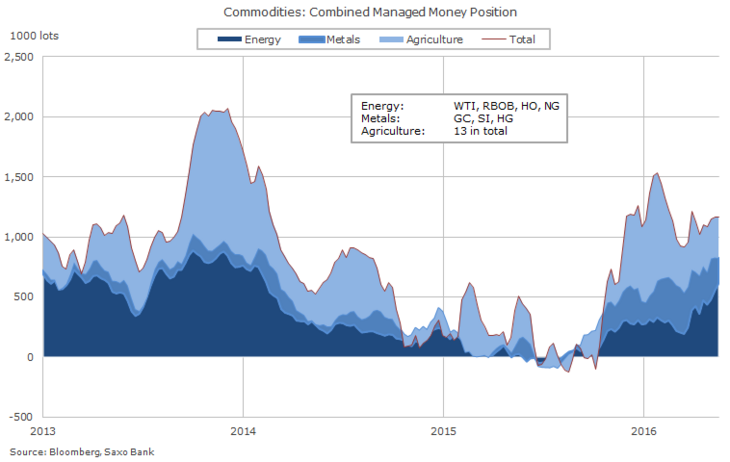 Gold has stabilised but the dollar poses a challenge

Funds have been heavy sellers of precious metals in recent weeks as the dollar strengthened and key technical levels were broken. Hedge funds has abandoned bullish gold bets at a record pace during the past couple of weeks. Since hitting a record 287,000 lots on July 5 the total net-long has seen a 46% reduction to the lowest since March.

In terms of physical gold, India, the world's largest consumer, is poised to hit a 9-month import high in October ahead of the festival season there. Demand from China, the world's second-largest market, was particularly strong in September, rising 64% year-on-year.

Money managers have been heavy sellers of gold during the past few weeks in a repeat of what was seen during May when fund selling took the price down by $100. Into this weakness, both during May and recently, we have seen continued demand from investors through exchange-traded products. This has been viewed as a sign that the long-term case for higher metal prices remain intact despite the short-term headwinds. 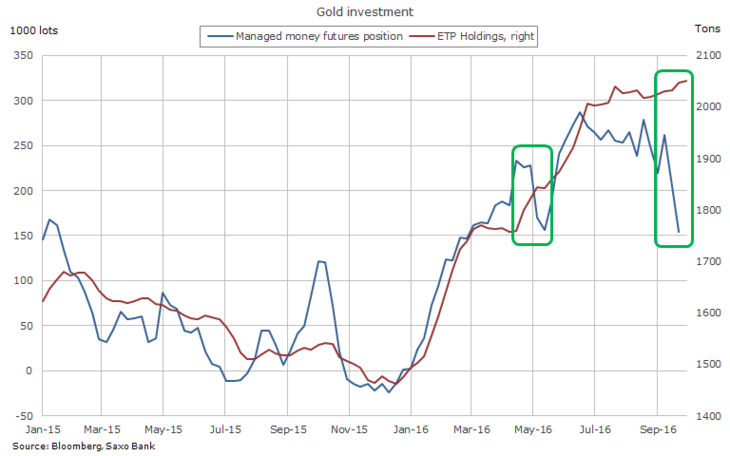 Gold investments through futures and ETP

Gold is not yet out of the woods yet with the risk of further dollar appreciation lurking. The performance this past week, however, has given us the first signs that the market is once again more receptive to positive news. For now the market remains stuck in a $1,245 to $1,275 range and it will take a break above $1,280 in order for the technical outlook to turn more positive. 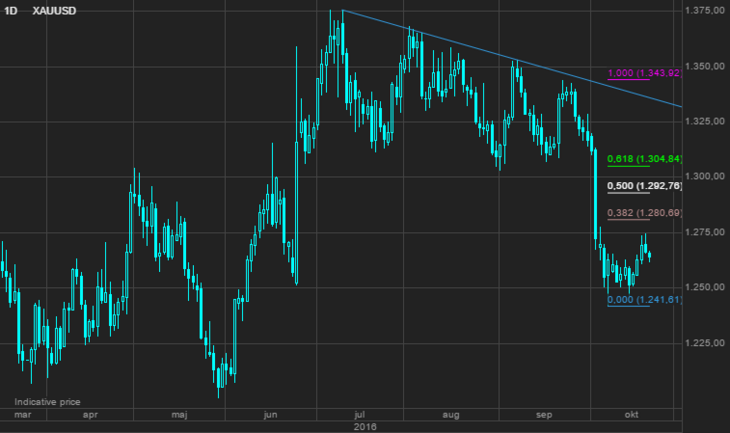 Oil traders and investors have spent the weeks following the Opec production cut announcement pricing in this event. As a result WTI crude joined Brent crude in hitting levels not seen the past year. With more than a month to go before Opec will announce the details of the deal in respect of who, how much and when the market has now settled into a wait-and-see mode.

Looking at the speculative build-up in long positions there is no doubt that the market fully expects a price-supportive deal to be hammered out. Money managers increased their bullish positions in WTI and Brent crude oil to a record 689,000 lots during the week of October 11. In just four weeks the net-long has risen by 53% and this has raised the risk of the market once again running ahead of itself. Given the one-sided speculation in higher prices a failure to deliver a production cut as promised now carries the risk of triggering a $5-$10 correction. 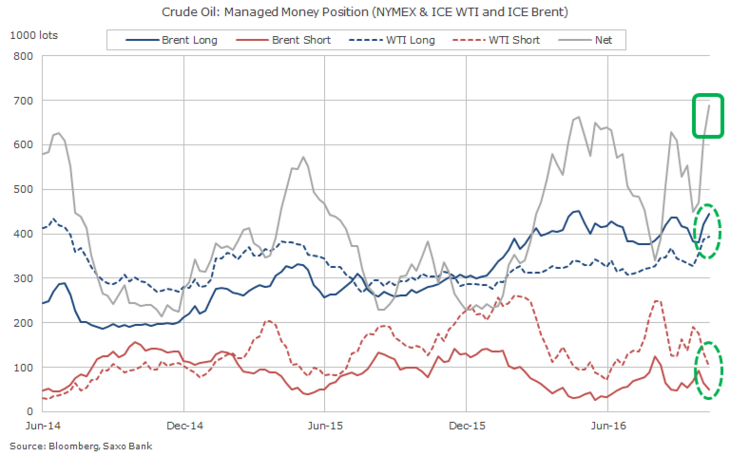 While the market has positioned itself for a deal several producers are still not behaving as if production cuts were coming, instead focusing on cutting prices to stay competitive while also talking up the ability to increase production further. The oil market has seen a great deal of volatility and wild swings in recent months. In fact four of the six +100,000 lots weekly changes in WTI and Brent crude oil fund positioning since 2011 have occurred during the past nine weeks.

Oil market volatility is not going to go away any time soon and while major producers and companies may be right in their belief that a new $50 to $60 range is in the making the room for error is currently much reduced. On that basis we view the risk reward before and especially after the November meeting as being skewed to the downside. This in the belief that a deal to cut production will only be successful if it is followed up by a clear guidance as to how it will be policed. This, considering Opec's very poor track record of adhering to previously agreed production limits.

Brent crude has spent the past couple of weeks consolidating above $51/b, a level which was touched on a regular basis during this time. A break below carries the risk of a correction to trend-line support at $47.50. The upside is currently capped by the double top from Q3 2015 at $54.30/b 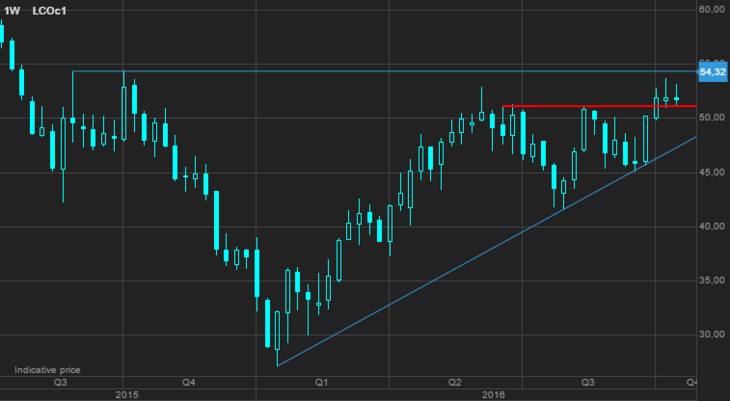