January proved to be a very volatile month for commodities and the final week was no exception, with the oil market continuing to attract most of the attention. Speculation of a so far unconfirmed and still doubtful grand bargain between Opec and Russia helped trigger a strong comeback as short positions were scaled back.

Gold's week-long rally ran out of steam leaving many new longs through ETPs contemplating whether they had jumped the gun. Coffee had its longest rally since June, while sugar experienced a rare setback as the lack of fresh bullish fundamentals triggered a clear-out of speculative longs held by hedge funds.

The energy sector jumped 5.6% on the week but remained down by eight on the month. This, combined with a slump in soft commodities, namely cocoa and sugar, helped deliver a seventh consecutive monthly drop in the Bloomberg Commodity index. 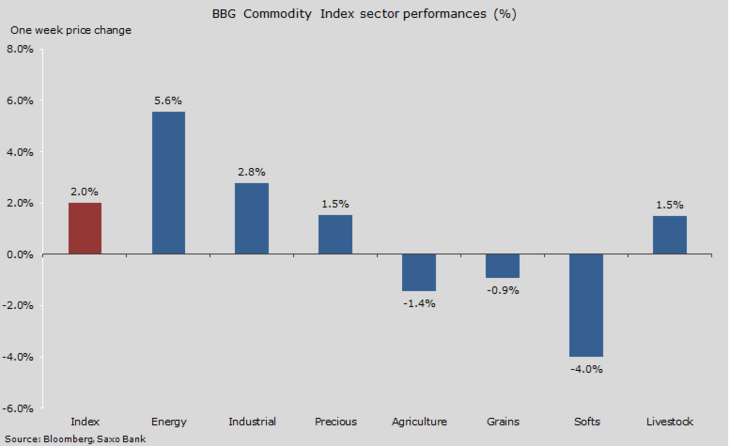 Sugar has been one of the most favoured longs in the commodity space after rallying 38% from September to December. After being range-bound for the past couple of months, it ran out of fresh bullish drivers to support a near record net-long position. The break below $14 triggered an exodus from funds who now will be looking for support for the March contract (SBH6) at $13 which represents a 61.8% retracement of the above-mentioned rally.

Platinum which recently reached a record 26% discount to gold has made a strong recovery after touching the lowest price since the 2009 recession. Further progress needs the support from gold and a technical break above $900 compared with $865 at the time of writing this. 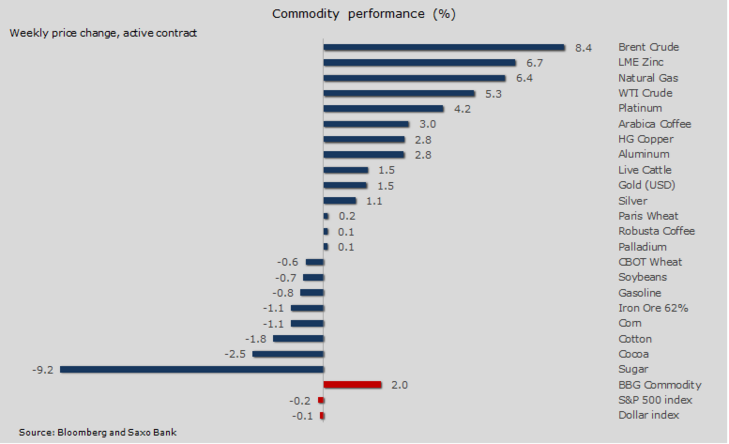 Copper traders are currently torn between whether to focus on weakening demand from China or signs that production continue to adjust lower. China will close down for its annual lunar holiday in February so the gains this past week seem to be driven by funds lightening their load of short positions ahead of this for metal traders quiet time.

The continued slide in oil helped trigger a high positive correlation between oil and stocks. This uncertainty helped support a recovery in gold during January. The market turmoil also saw US bond yields and rate hike expectations drop just a few weeks after the first rate hike in more than nine years.

We remain sceptical about whether gold has much further upside potential at this stage but at the same time we sense that the tide is turning and the calls for $1,000/oz gold will begin to fade. What's also different this time around (compared with last year when gold suffered a major slump for the remainder of the first quarter) is the limited long exposure the market currently carries. The combined position in futures and ETPs are almost one-third lower than this time last year. So even if market conditions improve, selling pressure on gold may be limited.

Technical gold is currently trading in a $50 wide uptrend with a band of support between $1,095 and $1,105/oz keeping it supported. 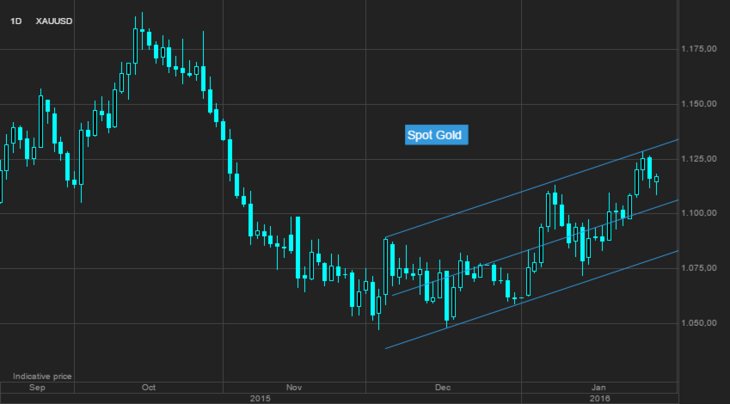 Will Russia/Opec deliver a killer punch to short sellers?

Ahead of the December 4 Opec meeting, members of the cartel made repeated calls on Russia seeking concerted action to halt the slide. Back then, however, these efforts were rebuffed and what followed was another 40% price slump and increased speculation that the price could go as low as $20/barrel.

Faced with this once-unthinkable prospect, the idea of a deal between Russia and Saudi Arabia began to receive increased attention. Spurred by comments from government and oil executives on both sides, the market reacted strongly. The prospect of a grand bargain resulting in a cut of several hundred thousand barrels/day would change the focus from oversupply towards the future supply impact of the major investment cutbacks that have been carried out during the past 18 months.

A 5% cut on both sides – a number that was mentioned at one stage – would almost remove the daily overproduction and significantly alter the oil market's dynamics. Faced with this prospect, hedge funds holding a near-record short in the futures market began buying back these positions.

The demand for oil futures this created helped send oil up by one-quarter from the recent low but as a busy week came to a close, denials from both sides have helped to reduce the weekly gain. 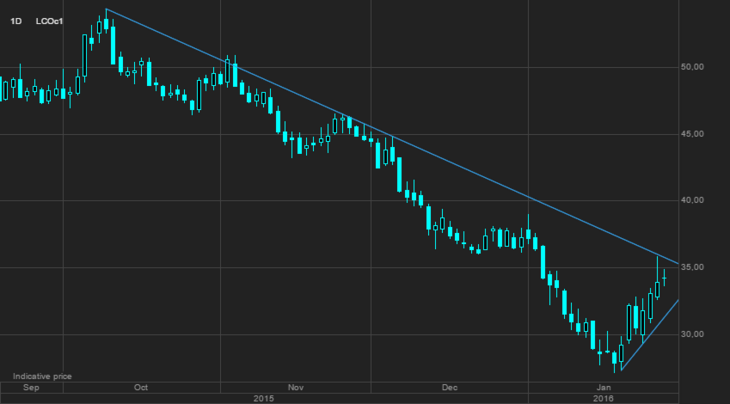 With market expectations thus raised, a failure to deliver could have a significant negative impact on oil prices with a slump back below $30/b increasingly likely. But with political intervention being a significant contributor to the setting of oil prices, traders are unlikely to be aggressive sellers below $30/b as renewed talk of cuts could resurface.

The weekly inventory report from the US delivered another jump in crude oil inventories to almost 500 million barrels. The rise was triggered by a sharp, and to a certain extent expected, seasonal decline in demand from refineries. A reduction in Cushing inventories and a small cut to production provided the silver lining that combined with the Russia/Saudi speculation to help oil shrug off this report.

How do investors trade oil in such a volatile environment?

The number of outstanding options trades has risen strongly during the past couple of weeks. From the charts below, we find that open interest on both puts and calls has risen strongly. Daily average price fluctuations in WTI crude oil are close to 7%, and faced with such level of volatility, it makes sense for traders and investors to use options as a way to express short- to medium-term views on oil. 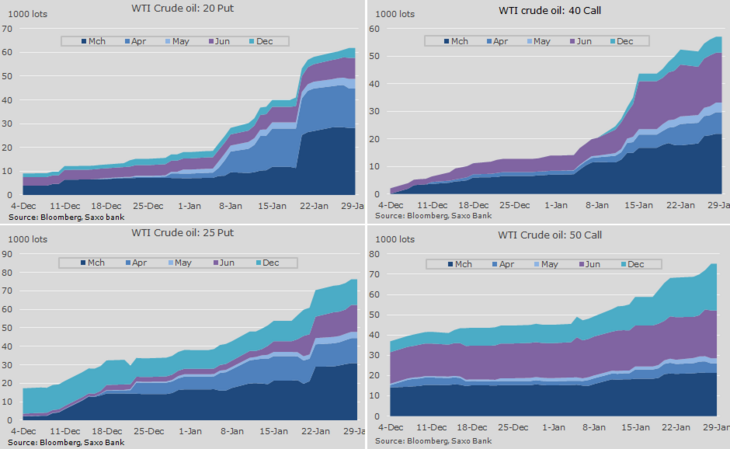 On the assumption that no deal between Opec and non-Opec producers is imminent, the likely near-term direction of oil remains sideways between $30/b and $35/b. A deal of the magnitude mentioned above, however, would change the dynamics and likely send crude oil back up to or temporarily above $40/b.

Many other moving parts help to make oil forecasting increasingly difficult at the moment. Apart from the speculation about production cuts, other important drivers can not be ignored. Among these are the outlook for Chinese demand, US production resilience, Iran's ability to increase production as stated, and ongoing developments in Libya, which continues to produce at levels below capacity.