Commodities continued their strong ascent with broad-based gains across most sectors with the exception of industrial metals. Towards the end of another strong week, however, some profit taking began to apply some downward selling pressure.

This came on a combination of many commodities having reached overbought conditions while the dollar recovered some of the losses in the aftermath of the weak US job report on June 3.

The dollar is back in demand with investors increasingly beginning to worry about the outcome of the June 23 Brexit vote in the UK. The combination of the European Central Bank turning its asset purchase focus towards corporate bonds and safe-haven buying of German government bonds helped high quality yield contract even more. 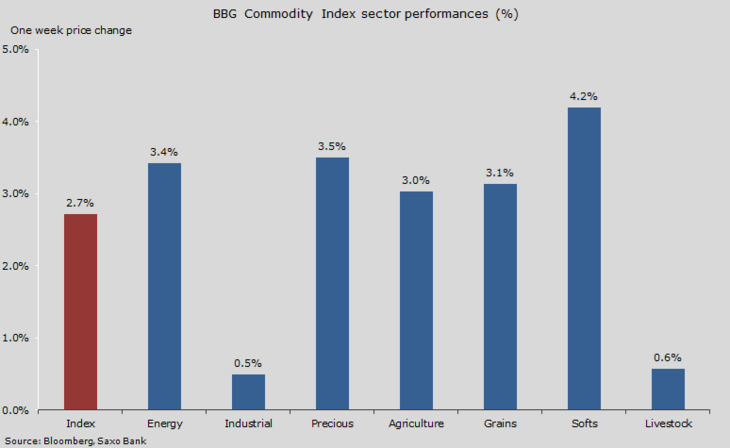 A contracting bond-yield environment, increased risk adversity hitting stocks combined with the emerging inflation threat from rising food and energy prices helped give precious metals an additional boost on top of the impact from the weaker-than-expected US job report for May. The dollar remains important but clearly not the only driver for metals and ahead of the Brexit vote, we could see this sector remain supported despite headwind from a stronger dollar.

The soft sector led the charge with both sugar and Arabica coffee rising strongly on weather-related issues in Brazil. Funds hold a record long position in sugar which increasingly has made it a candidate for profit-taking once supporting fundamentals begin to fade.
Funds meanwhile were short coffee into this week and this helped trigger a major short squeeze to a one-year high on the back of frost worries in Brazil. 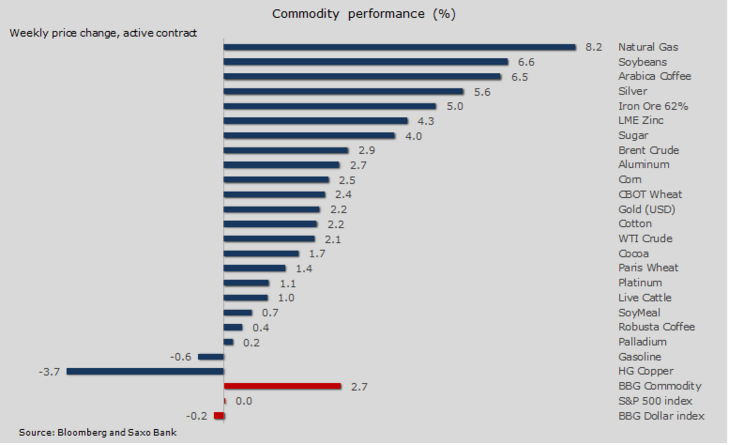 Copper was the odd one out considering a generally positive performance among other industrial metals, not least zinc which has been supported by mine closures and signs that supply will not meet demand. The changing sentiment from one of optimism on China towards overproduction and ample supply sent copper to a four-month low.

The weakness this past week was driven by a 39% surge in copper inventories stashed at LME registered warehouses. Most of the increases were in Singapore, South Korea and Taiwan with supplies likely to have come from China and from shipments to China being diverted, either due to lower demand or better trading opportunities.

High-grade copper back under pressure despite a general rise in investment demand for commodities. Critical area of support between $2 and $1.95/lb 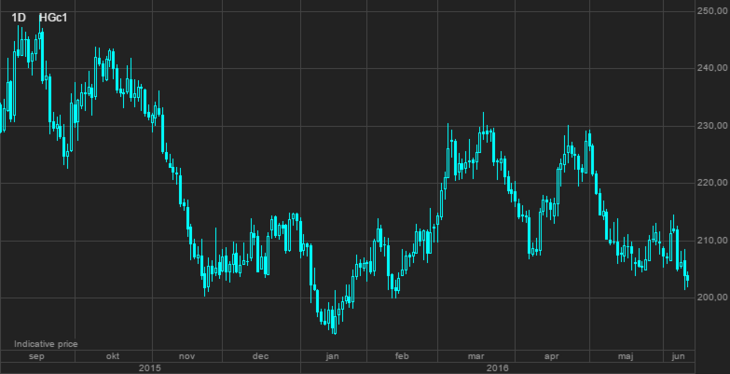 After trading sideways for a couple of weeks, WTI and Brent crude oil both resumed their rallies this week. Continued supply disruptions and reduced inventories in the US were the main driver behind the move. But the rally has also given under-pressure US producers some cheer with signs of optimism returning to the beleaguered shale oil industry.

Attacks on oil infrastructure in Nigeria by the Niger Delta Avengers are, if anything, stepping up as they have promised to disrupt the entire country's oil production. While the group is not expected to be successful with these threats, Nigeria's daily production has nevertheless slumped by more than 1 million barrels/day to the lowest point in two decades.

Production from Libya and now Nigeria continue to deteriorate which is helping to bring balance between global supply and demand. 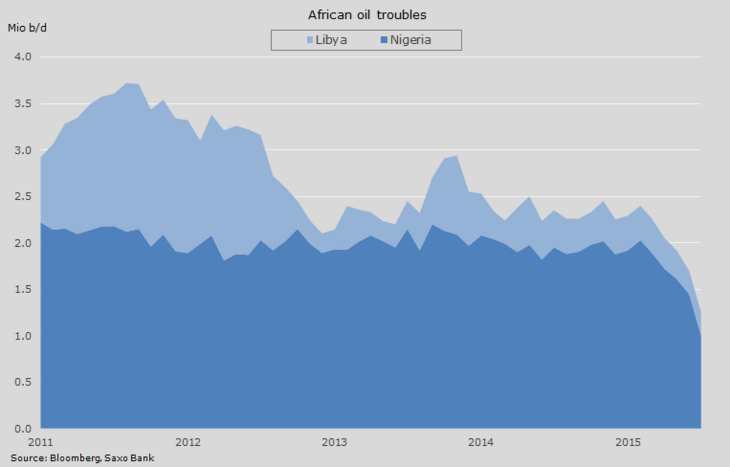 The annual decline in US inventories is now well under way. Weekly inventories dropped by 3.2 million barrel last week and combined with rising refinery demand these helped offset a counter-seasonal rise in gasoline inventories and the first estimated rise in US production since March.

The 10,000 b/d increase was driven by returning production from Alaska and a fading decline in the lower 48 states. Adding to this was the first weekly rise in US oil rigs since March underpinning an improving outlook for US. producers.

Green shoots are emerging in the US energy sector with the number of oil rigs on the rise while production shows the first signs of stabilising. 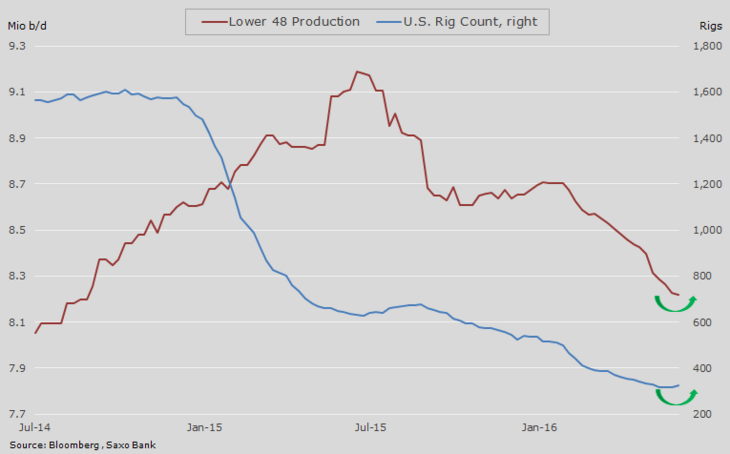 US production and rig count

After breaking above $50/b for the first time since last October, WTI crude oil reached $51.67/b before hitting resistance. An increasingly overbought market condition combined with poorer sentiment across other financial markets helped offset support from reduced supply.
The reversal led to a renewed attack on trend-line support at $49.90/b with a move below raising the risk of a weakness extending to $47.75/b, the recent low. 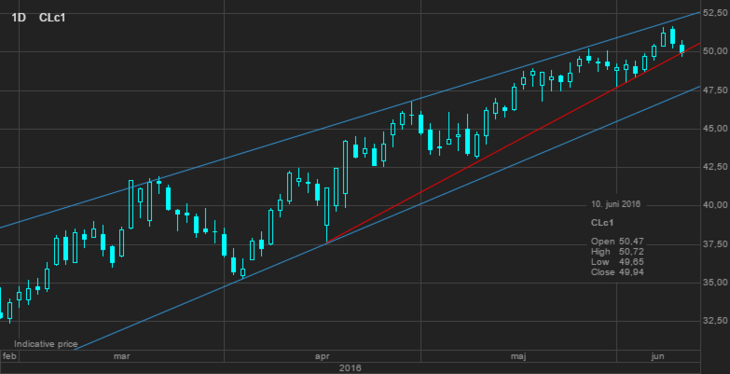 Gold and especially silver continue to build on the boost that the weak US job report provided on June 3. The initial rally was driven by expectations that a June and possibly a July rate hike by the US Fed had been abandoned.

Apart from continued strong demand from investors looking for an alternative to collapsing bond market yields, upcoming event risks such as the Brexit vote in the UK also played its part. Hedge funds cut bullish futures bets by one-third in the run up to the US job report and the scramble to rebuild longs have also been adding support.

Total silver holdings just 0.5% from the 2014 record high while gold accumulation so far this year has reached 400 tons. 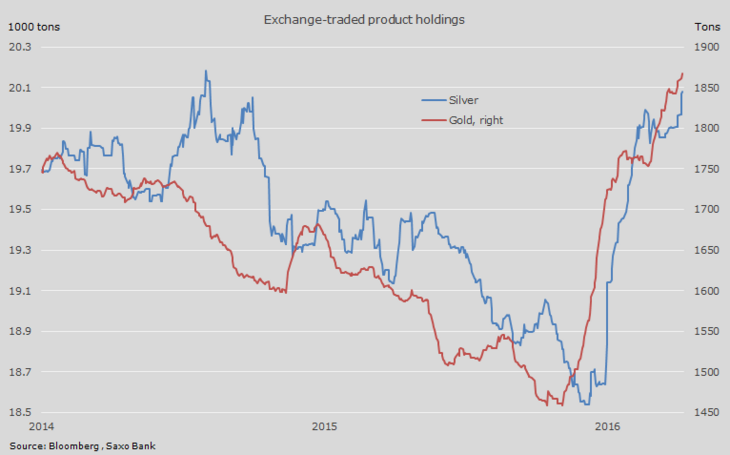 The compression in global-bond yields was highlighted in Europe with the yield on German 10-year government bonds homing in on zero. This has almost left one of the safest bond markets in the world out of reach of those looking for a return through the collection of coupon payments.

With the collapse in European bond yields, investors are increasingly looking towards the US and this resulted in the yield on US ten-year bonds reaching a 16-month low at 1.65%.

Inflation is another key component when looking at the potential return on a fixed income investment. The chart below shows how the yield after the reduction of expected inflation on US 5-year bonds has moved deeper into negative territory.

The dollar remains another key driver for precious metals investors but other drivers like those already mentioned should help cushion renewed dollar strength. 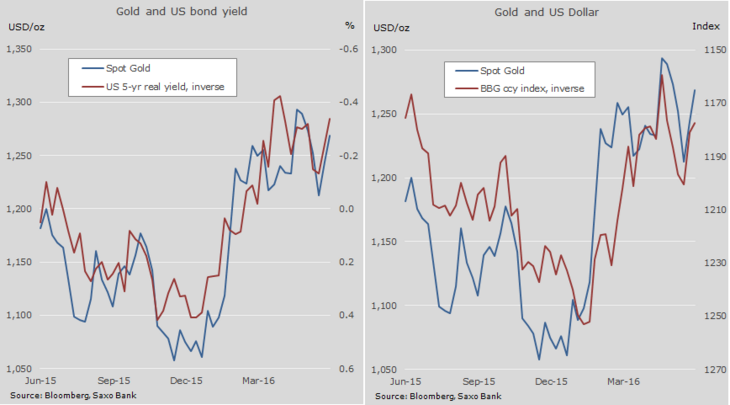 In an environment of rising event risk, sub-zero interest rates and now the potential of rising inflation following the recent jump in food and energy, gold and silver should continue to prosper.

Having broken above $1,265/oz on gold and $17.19/oz on silver, there is not much standing in the way of reaching the highs from earlier this year. 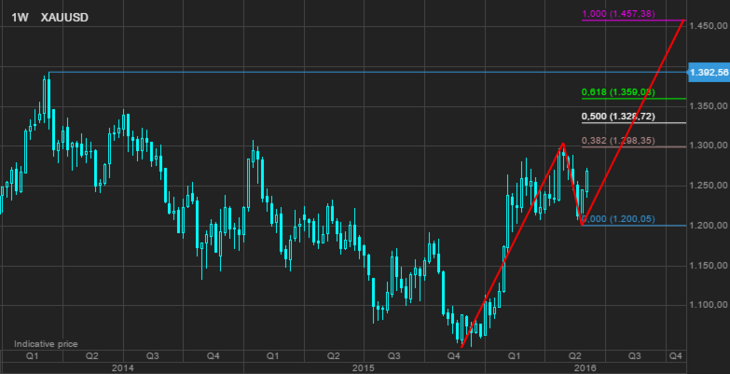 Precious metals on defensive ahead of busy central bank week