The Bloomberg Commodity Index, which tracks the performance of 20 major commodities split evenly between energy, metals and agriculture, continues to show a gain of more than 10% in the year to date. Some softness, however, has crept in during the past few weeks with some sectors, most notably energy, pausing after rallies in oil and natural gas ran out of steam.

Industrial metals found support from increased expectations that additional stimulus could be provided by central banks and from signs that China's economy stabilised during the second quarter. Copper led the charge but data showed that the bulk of the rally was largely due to short-covering with traders hesitant about getting aggressively long. 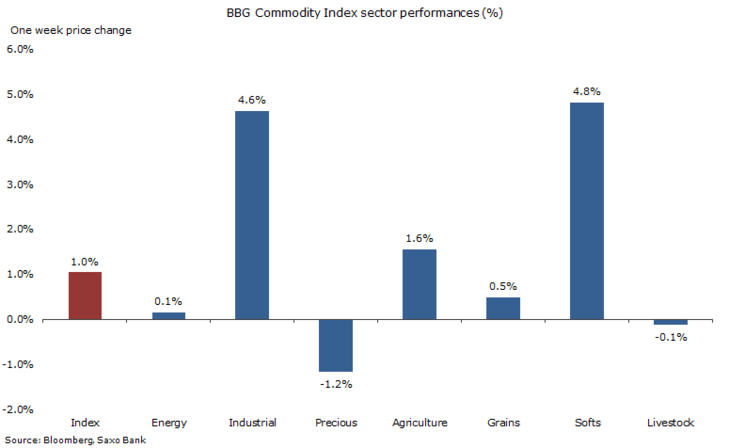 Strong gains for coffee and cotton were the main drivers behind the strong performance in the soft sector. Cotton was boosted by the USDA's downgrade of world inventories to a five-year low and was also helped by ongoing weather worries in the US cotton-growing regions. Coffee prices hit a 16-month high on adverse weather-related supply reductions of both Robusta and Arabica beans from key producing regions in Vietnam and South America. Additional support has come from a trucking strike in Columbia which could see July shipments slump by 50%.

Crude oil, which peaked some five weeks ago after almost doubling from the lows at the beginning of the year, traded close to unchanged on the week. In between, however, the market was left yo-yoing with the tug of war between the short-term and long-term outlooks creating some volatility. This is not helped by the fact that we are entering the peak summer holiday season where liquidity often comes at a premium  with dealing desks increasingly being left deserted.

Precious metals are taking a breather with gold trading lower for the first time in seven weeks. The run up to and the immediate aftermath of the Brexit vote triggered a strong surge in demand for precious metals and some of the drivers behind that move are now fading after some healthy consolidation has taken over. 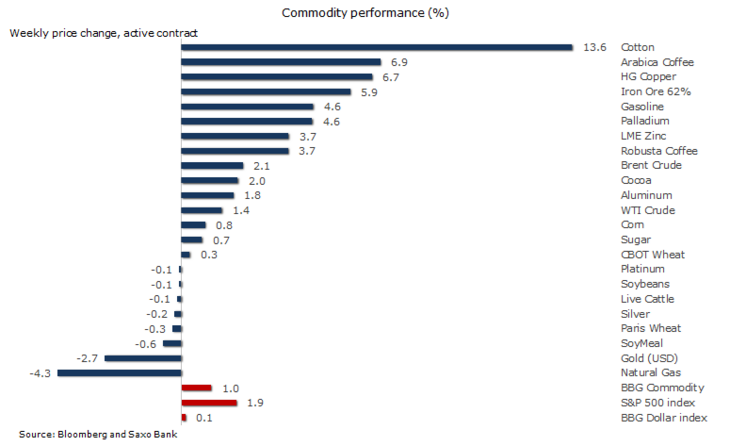 Crude oil has been settling into a wide range since hitting a peak on June 9. The rebalancing process which was given additional support from multiple supply disruptions during May has since slowed. Currently, the market is caught in a tug of war between weak short-term and supportive long-term fundamentals.

The International Energy Agency highlighted these opposing forces in their latest monthly report. While seeing the market balancing they prompted concern that very high oil stocks could pose a threat to the recent stability. On the rising stock of products they said: "Although stocks are close to topping out, they are at such elevated levels, especially for products for which demand growth is slackening, that they remain a major dampener on oil prices."

US inventories of gasoline and diesel remain stubbornly high. Similar developments have been seen across the world, especially in Europe and now also in Asia. While importing less crude oil in June, China increased exports of refined petroleum by 10% to the second highest level on record.

Demand needs to remain strong in order to reduce the overhang of product stocks. Any negative surprise on demand could trigger a deeper than expected price correction over the coming months.

However, the long-term fundamentals remain very price supportive as there is no doubt that the investment gap currently building up in the oil industry would worsen should crude remain below $50/barrel for a longer period. The longer it takes to reduce the overhang of supply the bigger the risk of a sharp move higher when that time comes.

Before reaching a peak at $51.6/barrel on June 9, hedge funds had already been active sellers of WTI (and Brent) crude oil since April. Following the Brexit vote, the reduction gathered pace and during the two weeks up until July 5 the combined net-long of WTI and Brent crude was cut by almost 100,000 lots. The increased short-based has made the market more prone to sharp recovery moves on the assumption that short sellers are much more short-term focused and more risk averse than those holding long positions. 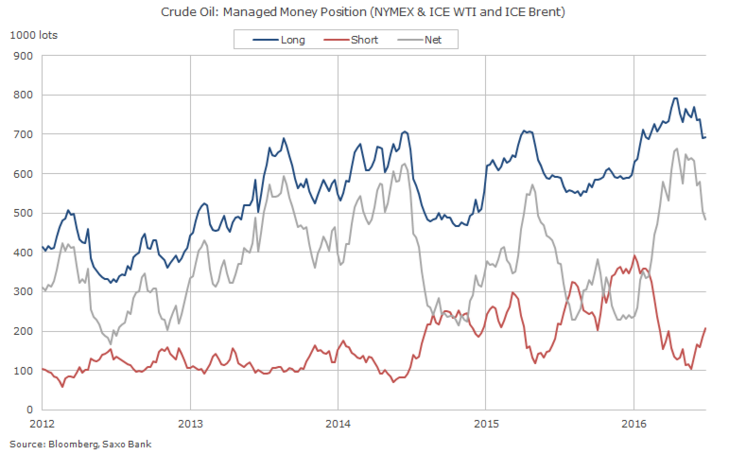 Crude oil remains range-bound with the short-term risk skewed to the downside. A break below $44.50 could see WTI targeting support at $42.50 but a return to $40 and below we view as unfounded as weaker prices will be met by demand from longer-term investors.

A seven-week precious metals rally has come to a halt with gold and silver both correction lower. The fading Brexit risk and a stronger than expected US jobs report for June helped send stocks and bond yields higher. After creating a double top at $1,375/oz these developments, although somewhat offset by a weaker dollar, helped trigger a healthy consolidation in gold following the surge of recent weeks.

Hedge funds are likely to be have been the main sellers just like we saw back in May when a then record long was reduced by one third. During the following five weeks they once again became agressive buyers. The net-long reached 287,000 lots in the week to July 5, some 53,000 lots above the level from where reductions were seen back in May. 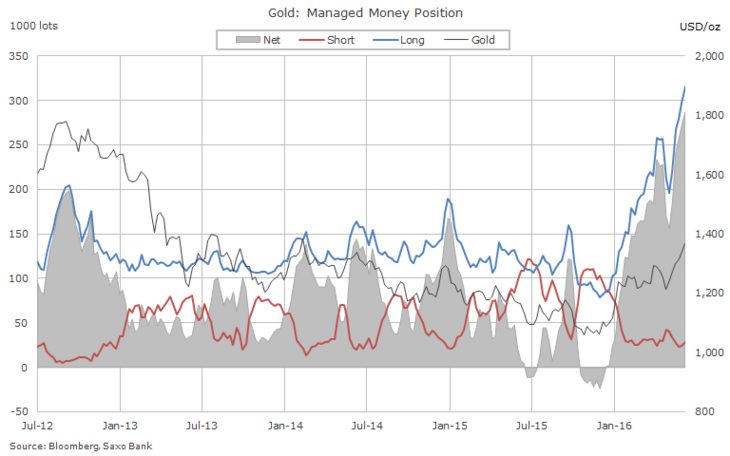 So far the retracement has been relatively shallow with gold having found some initial support at $1,328/oz, the 38.2% retracement of the post Brexit rally. Main support however is somewhat lower towards $1300 a break through which could trigger further weakness to $1275/oz.

The rapid and continued increase in demand for exchange-traded products backed by gold also came to a halt with total holdings falling by 6 tonnes. This, however, pales against the 132 tonnes increase of the previous four weeks. 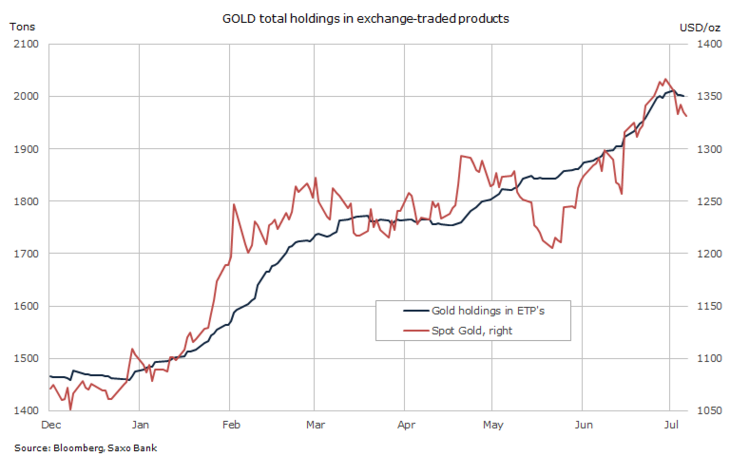 The lack of accelerating profit-taking given the extensive increase of long positions since May is a sign that underlying demand for gold remains strong. A bigger correction than what we have seen so far will be required to shake investors out of their current bullish conviction.

We are entering the US earnings season and while traders look at equities as the new bonds in terms of chasing yield (dividend), we remain lukewarm on the sustainability of the recent equity rally. On the basis that bond yields will remain depressed for the foreseeable future we see no reason to change our bullish view on gold. Following a period of consolidation we still see gold meeting our target of $1,400/oz.