The commodity sector was trading close to unchanged for a second week. Weakness in energy and especially precious metals was offset by gains across the agriculture and industrial metal sectors.

Precious metals, including platinum and palladium, have been on the slide throughout May with the stronger dollar and renewed focus on rising US interest rates triggering a long overdue correction and profit-taking.

The energy sector was mixed, with natural gas falling on the back of a bigger-than-expected inventory rise. This was somewhat offset by another – albeit small – weekly gain for crude oil. Both WTI and Brent crude oil finally made it above $50/barrel, but after finding limited interest to take them higher, some profit-taking and technical selling knocked prices lower. 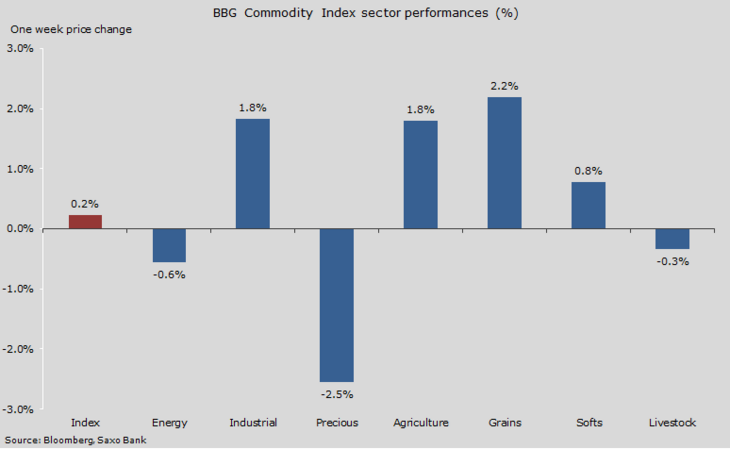 The agriculture sector notched up some strong gains and has now rallied in six out of the past seven weeks. Flooding and crop quality concerns in Argentina has seen soymeal rally by more than 50% since early April. This has supported not only soybeans futures, but also other crops such as corn. Sugar has reached its highest level since July 2014, and the break above 17 cents/lb helped reduce nervousness among funds who currently hold a record long exposure to the sweetener.

Industrial metals traded higher led by copper as it received a boost from strong US housing data and easing concerns about China. Short-covering also helped drive copper higher after funds had turned positions around from a net-long to a major short during the previous two weeks.

The roller coaster ride in iron ore continued as it slumped back below $50/tonne after hitting $70 just five weeks ago. A speculative bubble on the Shanghai Futures Exchange exploded in spectacular fashion back then. Rising supply from miners continuing to increase production is coming at a time where demand from Chinese steel producers slows. 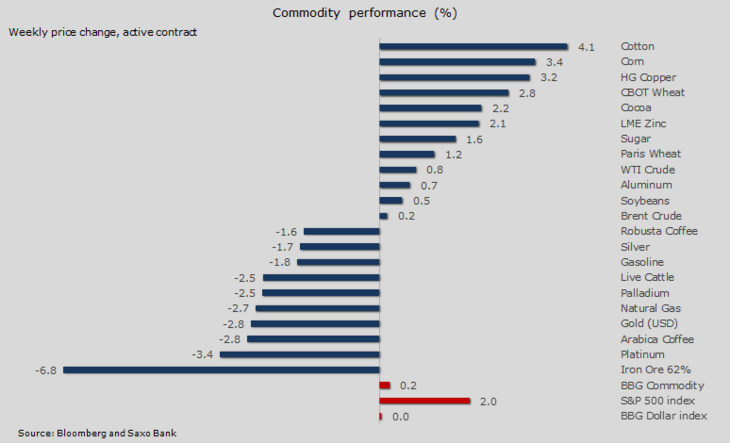 Crude oil finally reached and managed to breach the psychological level of $50/b this week. That level had increasingly become a focal point among traders and one that combined with the multiple involuntary supply disruptions had been supporting the market during the past couple of weeks. So much that the normal strong negative correlation to the dollar had broken down, with oil moving higher despite the headwind being created by a recovering dollar.

Once the $50 level was broken, however, the lack of follow-through buying on both WTI and Brent crude oil raised a few eyebrows and sellers quickly emerged. Signs that producers have stepped up hedging activity further out the curve has increased the "risk" that these higher prices could see oil production among high-cost producers stabilise and potentially begin to come back.

So whether the rejection is signaling a near-term top in the market is still too early to say. Bullish momentum in crude oil has been strong for several weeks now, not least due to the fundamental support coming from multiple supply disruptions which have helped, at least temporarily, to balance the market.

Funds increased bullish bets on both crude oils by 75 million barrels during the week ended May 17. The combined long of 650 million barrels that these investors now own is not far from the record seen back in April. This build-up in speculative longs combined with technical observations turning negative, a stabilising US rig count and seasonally weak refinery margins carry the risk of triggering a deeper correction.

WTI crude oil has been trading higher within an ascending wedge, but the rejection above $50/b could open up for a technical correction. Such a move would initially take it down to the bottom of the wedge at $47, while a break could see the move extend to the bottom of the uptrend from the February low, currently at $45. 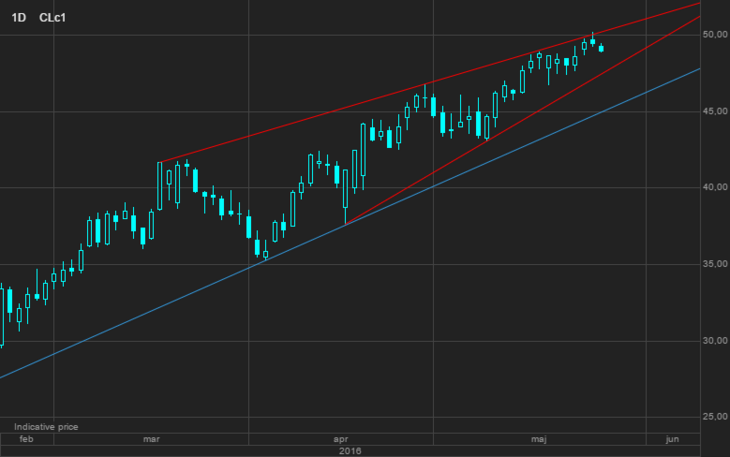 Opec meeting likely to yield nothing

The 167th meeting of the Conference of the Petroleum Exporting Countries (Opec) in Vienna on June 5 will begin to attract some attention over the coming days. Considering the continued price rally since the failed Doha gathering, this meeting has become increasingly irrelevant. No decision is expected to be taken as none is required.

The market focus has shifted away from Opec as it has done very little to support the price recovery apart from providing some verbal intervention. Instead we have seen multiple and major supply disruptions which undoubtedly have helped balance the market and helped drive the price higher than what was otherwise warranted at this stage of the recovery.

The best Opec can do is to sit down and talk oil instead of letting politics and regional differences get in the way. Saudi Arabia's new oil minister is expected to repeat the hardline approach seen at the failed Doha meeting. How that will go down, especially with Iran, remains to be seen.

Rebuilding the cartel's reputation should be a priority. Whether they succeed or not will determine the potential impact on the market.

Precious metals have been rocked in recent days by the increased hawkish rhetoric from several Federal Open Market Committee members. As a result of this, we have seen interest rate projections once again being raised and the dollar has benefited from these developments.

The risk-on sentiment in stocks and the continued support for the dollar, combined with rising bond yields, have all helped create a challenging environment for precious metals, not least gold. And for the first time since the strong rally began back in January, questions have arisen about the sustainability of the rally and gold's ability to find support.

Investment demand for gold, especially through exchange-traded products, has remain solid this month, at least up until yesterday when a small reduction was seen. Total holdings during this time have nevertheless risen by almost 5%, while the price of gold has fallen by 5.5%. 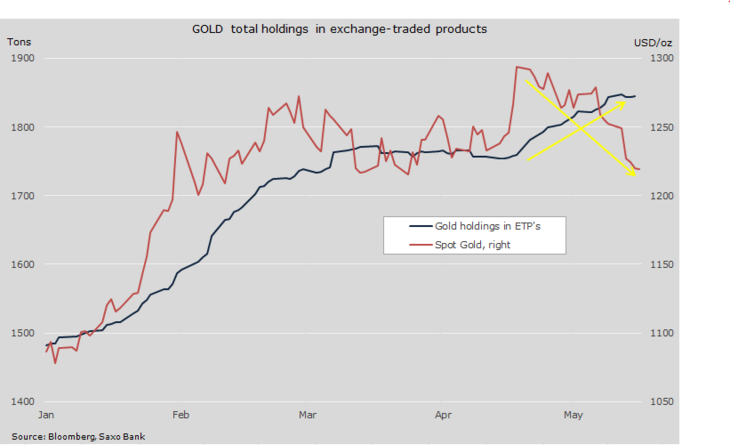 Investors have in other words viewed the price weakness as an opportunity to accumulate exposure in the belief that the long-term direction remains up.

Hedge funds using futures, on the other hand, may be the main culprits behind the recent selling. The positions held by this group of investors are most likely to have tight stops, and with no underlying exposure to hedge, they add and reduce positions in accordance with market behaviour.

During the first week of May, they increased their net-long futures and options position by 26%. With just a few changes seen during the proceeding two weeks, these positions are now under water, and adjustments are likely to have occurred.

After breaking lower during the past week, attention has now turned to the major retracement levels. In order for this to be nothing but pro-trend correction, support needs to be established preferably ahead of $1,205/oz. A deeper correction to $1,175/oz will still be OK, while a return to $1,145/oz would signal a return to the drawing board for fresh guidance. 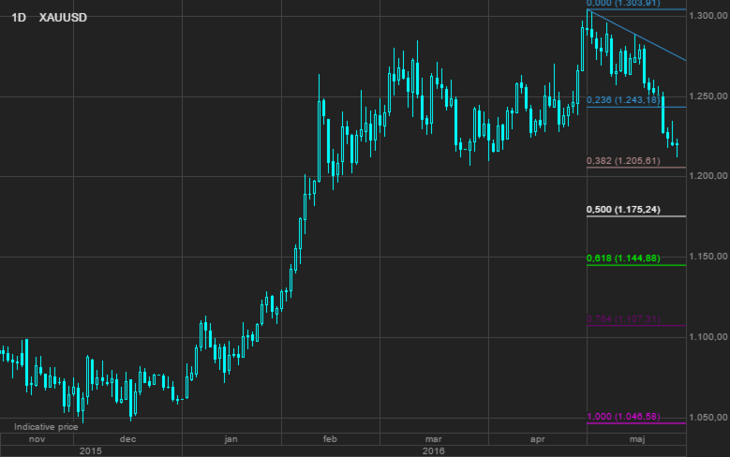 While US interest-rate expectations are being adjusted higher and the dollar continues to recover, gold will be struggling. However, low growth, negative sovereign-bond yields, the potential of inflation making a rare return and upcoming event risks make us view the current setback as a healthy correction within the established uptrend.