A revolution is under way in the insurance industry in Europe. Solvency II is a complete overhaul of the supervision of insurance within the EU. The project will introduce a new solvency regime with an integrated risk approach that reflects the risks being taken by insurers much better than the current Solvency I regime. Implementation is scheduled for 2010. This article answers policyholders’, intermediaries’, and investors’ frequently asked questions on the topic. It also incorporates comments given by Standard & Poor’s Ratings Services at the European Commission’s (EC) public hearing on Solvency II on June 21, 2006. Standard & Poor’s was asked by the EC to participate in the panel to discuss the impact of Solvency II on policyholders and other stakeholders.

Is the Committee of European Insurance and Occupational Pensions Supervisors (CEIOPS) doing a good job?

We have been impressed with the quality and timeliness of the advice being provided by CEIOPS to the EC to date. In turn, the EC is giving CEIOPS increasingly clear guidance on its mission. As a result, Solvency II holds out a realistic prospect of moving Europe’s insurance supervision onto a modern risk-sensitive platform in the not-too-distant future.

How does Solvency II compare with Standard & Poor’s approach to determining insurer ratings?

We think that Solvency II will result in some convergence of the supervisory and rating approaches. Indeed some have characterized our rating process as a rehearsal for Solvency II. Some companies, particularly mutuals, which are less subject to external oversight, use the rating process purely as a management discipline, choosing to keep their ratings confidential.

This convergence should not be surprising. Although Standard & Poor’s is not a supervisor or regulator, we have some common interests with supervisory bodies (see “Exploring Insurance Rating Agency Myths And Truths,” published June 7, 2006, on RatingsDirect, Standard & Poor’s Web-based credit analysis system). Our analysis contains nine elements. Two of these—management and corporate strategy, and enterprise risk management (ERM)—have similarities with Solvency II Pillar 2. Four further elements—capitalization, investments, liquidity, and reserves—are more aligned with Pillar 1. The remaining three components—competitive position, operating performance, and financial flexibility (the ability to raise new capital and liquidity when required)—have a more forwardlooking focus. These components will continue to differentiate supervisory and rating approaches. All other things being equal, we consider the mainly qualitative Pillar 2-like components of our analysis to be more important. They provide a foundation for the mainly quantitative Pillar 1-type analysis. As with our own analysis, the quantitative components of Solvency II have had too much of the limelight in public debate.

Each of the components of our analysis is interlinked to varying degrees. For example, if managed well, using effective strategies, a strong competitive position should enable a company to achieve strong earnings, which in turn builds its capitalization and reinforces its financial flexibility.

Regarding Pillar 1, we have operated a capital adequacy model in Europe since 1997, and are currently developing the third enhancement to that model. For groups that have credible  economic capital models as part of strong ERM capabilities, we plan to allow elements of those models to influence our view of capital adequacy in the near future. This is consistent with the incentives built into Solvency II for a company to have an economic capital model.

We do not believe that Solvency II will result in much change. As the nature of the dialogue between insurers and their supervisors is about to change, however, we will want to understand any concerns the supervisor has arising from the new approach, and to form our own views about those issues. Although we perform our own analysis of capital, we cannot ignore the supervisory view. If we thought that the capital adequacy of an organization was strong but the supervisor was on the point of intervening because it thought otherwise, we could hardly ignore that fact. In the past, this situation was rare, given the low capital requirements in most of Europe. Under Solvency II, however, this may happen more often, but it will not change our approach. Although our approach will not change, the European insurance sector undoubtedly will, and we will need to capture the increased pressure on consolidation in our analysis (see “Will the introduction of Solvency II result in further consolidation in the insurance sector?” below).

Will the introduction of Solvency II result in further consolidation in the insurance sector?

We think that Solvency II will add to the pressures to consolidate, although it will not be the primary reason for consolidation. Consolidation is already advanced in many markets. Global reinsurance and industrial lines insurance experienced considerable consolidation in the past and, after pausing for a few years, this has now resumed. In retail business, the Nordic region is highly consolidated, and the U.K. has also undergone substantial consolidation. Although much of Continental Europe has its regional national champions, consolidation still has a long way to go here.

Ultimately, survival in the insurance industry depends on insurers being good at what they do, having scale and diversity, or having a defendable niche product or distribution medium. Being a small to midsize insurer providing commodity products is an uncomfortable place to be and will become more uncomfortable. These companies will be the main victims of consolidation and  there are many of them.

Transparency is a significant influence on consolidation. Transparency within companies is improving. Boards of directors know more about whether their businesses and products are truly adding value for their owners, and are taking decisions accordingly. Companies’ transparency  with their owners and capital markets generally has improved greatly and transparency with supervisors is about to do so, through Solvency II. Product transparency is behind the curve, but will increase. This will allow consumers and intermediaries to make more informed comparisons. There will be nowhere to hide.

The guarantees and options crisis affecting life insurers across Europe over the past five years, for example, would have been much deeper if it were not for the mortality and expense margins built into many products, usually hidden from the consumer. Products are now being decomposed and the pricing of each component is becoming clearer, allowing insurers, banks, and asset managers to compete on a more equal and transparent footing. Solvency II is likely to accelerate consolidation, but not in the form of a huge upsurge in 2010, however, because the impact is  already being felt as companies anticipate change. The impact will continue after 2010, over the likely transition period and beyond. Furthermore, companies are already pursuing competitive advantage through the related themes of ERM, value-based management, and increased transparency. The industry faces a decade of radical change. We have identified three relevant factors specific to Solvency II, which are outlined below.

First, we would expect capital requirements to increase substantially as a result of Solvency II. This should in large part be covered by available capital, which is robust currently, and will be enhanced by the excess non-life claim liabilities likely to be liberated under Solvency II—based  on the results of CEIOPS’ first Quantitative Impact Study (QIS 1) on the current adequacy of claim liabilities. As a result, we would not expect to see industrywide capital raising, but there are likely to be some companies that need to do so. Some shareholders or owners will have the capacity and willingness to contribute new capital, others will not, although new hybrid capital may cover some of the shortfall (see “European Insurers’ Rising Use Of Hybrid Debt Adds To Financial Flexibility, Capital Adequacy,” published June 8, 2006, on RatingsDirect). Second, the diversification and size benefits in CEIOPS’ placeholder capital model (included in QIS 2), and more significantly in the advanced company models where they are accepted by supervisors, will give the bigger, more diversified groups capital relief and therefore a pricing advantage in the market. Smaller insurers may find it increasingly difficult to compete while providing similar returns to their owners. Third, the risk management capability and sophistication required to respond to Solvency II is demanding. In some cases, companies face complete overhauls of their systems to enable them to respond to Solvency II. The QIS 1 request for varying confidence levels of non-life claim liabilities is an example. Only a tiny proportion of European non-life insurers have a genuinely stochastic view of their claim liabilities. Many smaller companies do not even have actuaries. Companies will struggle to acquire these systems and capabilities, which will add to the pressures to consolidate, as will the costs involved. Solvency II will further emphasize the advantages of scale.

Will there be more insolvencies under Solvency II?

There have only been a handful of insurer insolvencies in Europe in the past three decades. It will be difficult to maintain a similar track record under Solvency II. A political decision needs to be taken regarding tolerance of insurer failure. The EC has a working hypothesis of a risk of ruin probability of 0.5% based on a one-year horizon. This is arguably a greater level of risk tolerance than that of many European supervisors and governments historically.

How transparent will Solvency II be?

This remains to be seen. Historically, supervisory returns have not been public documents other than in the U.K. and Ireland. Standard & Poor’s expects more information to enter the public domain under Solvency II Pillar 3 principles, but the extent of this has yet to be determined. In particular, the crucial Pillar 2 capital loadings may not be made public, which would be an impediment to credit analysis.

Basel II and IFRS have been highly politicized. Will Solvency II be the same?

Yes. The consultation with the industry is happening well in advance of implementation, however. CEIOPS sought and received clear guidance from the EC on the proposals it should be making for the adequacy of claim liabilities. This will help resolve the divergent views of CEIOPS’ membership.

The potential consequences of Solvency II that may have a bearing on political debate include:

How does the timing of IFRS Phase II affect Solvency II?

Both projects are scheduled for implementation in about 2010. The EC’s job would have been much easier had IFRS Phase II been completed by now. Pillar 1 requires a comparison of available capital with capital requirements. IFRS could substantially inform the question of available capital.

In the meantime, the EC will have to design its own accounting framework, which may subsequently be adjusted once IFRS is finalized. The CFO Forum will be hoping that their recently announced Elaborated Principles for an IFRS Phase II Insurance Accounting may influence both the EC and the IASB in their deliberations.

Are supervisors and insurers ready?

Some countries are better prepared than others. The U.K. is probably the best prepared, followed by The Netherlands and the Nordic region. Switzerland is relatively well prepared, particularly owing to its widely respected Swiss Solvency Test, although Switzerland is outside the EU. Elsewhere in Europe, supervisors and companies have much to do, although the larger groups in the major markets are usually well prepared, particularly the CRO Forum members. Over the  next few years, supervisors and companies will be competing for skills that are already scarce,  alongside investment banks, brokers, and firms of consultants, actuaries, and accountants. 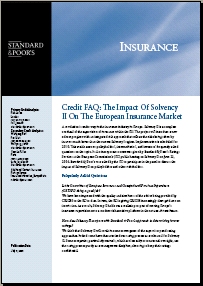