China's decision to devalue its currency (CNY) helped send several commodities down to new multi-year lows this week. Being the biggest importer of many key commodities, including oil and industrial metals, this move has increased the cost of imports and the market now frets that demand will suffer in consequence.

The worry about slowing demand also helps to explain why the share price of major exporting companies such as car and luxury goods producers saw some significant selling pressure. Daimler in Germany and LVMH in France both initially fell by more than 10%. 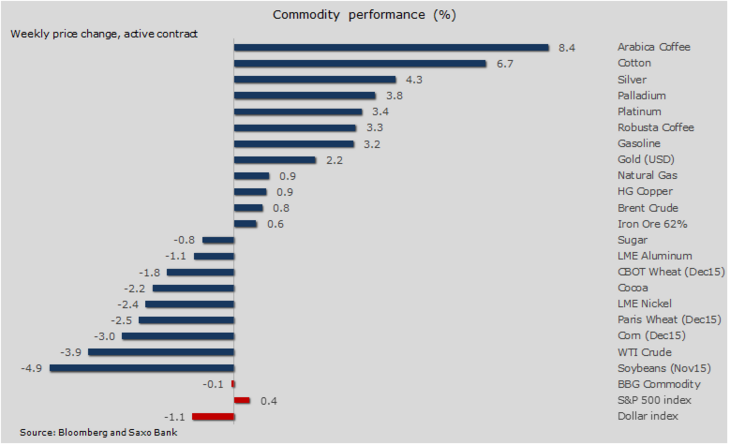 Where there's a  loser, there's usually a winner too, and title this week went to precious metals which benefited from short covering. In recent weeks the negative sentiment towards precious metals, especially gold, had led hedge funds to accumulate a record net-short position.

As the yuan devalued, gold jumped, in the belief that it could spur demand for alternative investments from Chinese investors seeking protection from a declining currency. It also helped reduce expectations of when and by how much the US Federal Reserve eventually will be able to raise interest rates.

Elsewhere, the US Department of Agriculture wrong-footed the grain market by raising its production estimates for both corn and soybeans. With China being the biggest importer of soybeans the price was already under pressure when the announcement was made and it fell by the exchange set limit of 70 cents/bushel or more than 7%.

Staying with the agriculture sector, Arabica coffee, up until recently one of the worst performers year-to-date, tops the table on supply concerns related to Brazil. Despite the headwind being created by the continued weakness of the Brazilian real (BRL), coffee has rallied strongly on concerns that this year's production will disappoint, potentially bringing inventories down to dangerously low levels. 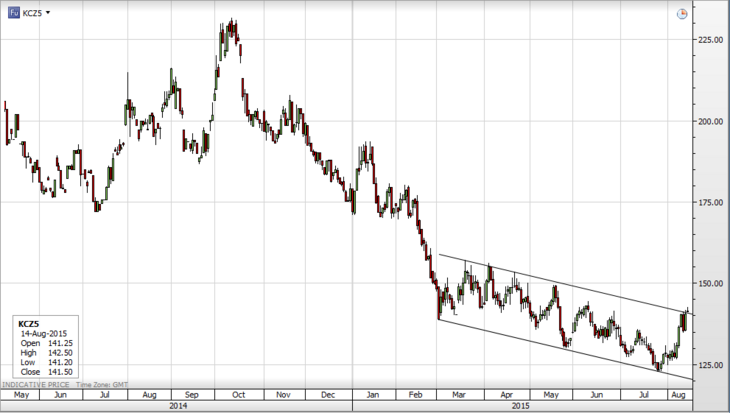 Gold was hit by its own flash crash on 20 July and since then sentiment has been turning increasingly against the yellow metal. During the period, hedge funds turned net short for the first time since at least 2006 while holdings in exchange-traded products backed by physical gold dropped to a new six-year low.

So one week ago, gold's potential best support came from the fact that many had turned against it, thereby leaving it exposed to short covering. This was exactly what happened on Tuesday when devaluation news from China hit the market. Not only did it raise the prospect of increased demand from Chinese investors seeking a hedge against falling currency. It also called into question the timing of when and after that, how much, the US Federal Reserve will be able to raise rates. 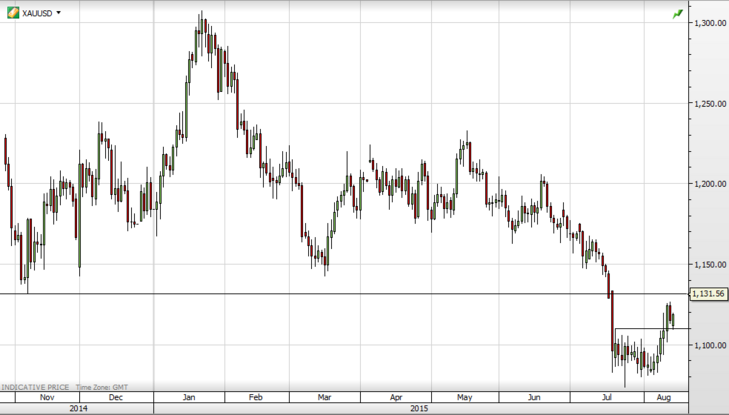 Gold priced in Chinese offshore renminbi jumped by 7% while priced in dollars it has yet to break any significant levels. The collapse on 20 July took the price below the previous support at $1132 and it would take a move above this level to attract aggressive short covering. According to estimates, short covering alone could take the price higher by $50 and no doubt some of the buying seen already has come from the squaring of short positions.

While Brent crude managed to hold onto a small gain WTI crude continued its descent and reached a new 6 1/2-year low in the process. The weakness in global oil markets was still supported both by Opec's high-production policy and the resilience of US shale oil producers where production has begun to slow but not at the rate expected.

So far unfounded worries about a slowdown in demand from China, the world's largest importer, also added to the weak sentiment with the only glimmer of hope coming from the International Energy Agency. In its latest monthly report it saw oil demand growing at the fastest pace in five years.

But the above mentioned resilience among non-Opec producers meant that the market will probably only begin to balance itself towards the end of 2016 – especially in light of the potential increase from Iran early next year.

Why is WTI crude falling more than Brent?

As the performance table shows this past week saw Brent crude oil outperform WTI crude by almost 5%. Why is Brent crude not seeing the same pressure considering its role as the global benchmark and when so much focus is on China together with Opec and its overproduction? The answer is concerns related to seasonal developments in the US oil market. Following what has been a very strong year so far for gasoline demand, refineries have been consuming crude oil at a record pace.

But despite this strong demand US crude inventories remain almost 100 million barrels above the five-year average. As the US driving season comes to a close we will see refineries across the US begin focusing on winter demand and during this transition crude demand slows and this will add to already bloated inventories.

The contango which reflects the discount between spot crude and future months has risen strongly on WTI crude this week as the market begins to discount another rise in US inventories during the next two to three months. As a result of this Brent crude has outperformed with its premium over WTI crude rising above $7 per barrel for the first time since April. 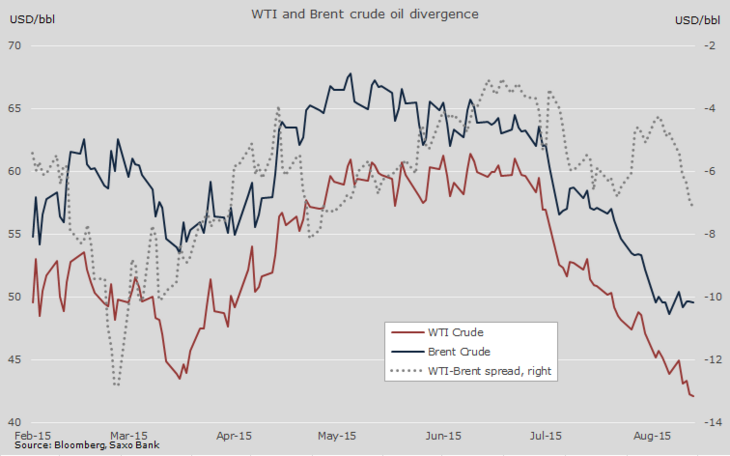 Will tanks fill up before production slows?

Oil companies across the world have finally started to feel the squeeze with low prices triggering sharp reductions in capital expenditure and headcount. In the US, the corporate high yield bond index covering energy companies has returned to junk status trading more than 10% above treasuries. Adding to the pain is the collapse seen in forward prices which have sharply reduced hedging opportunities. WTI crude for delivery in 12 months time is trading at a ten-year low and this combined with reports that many companies have reduced hedging on future production, leaves many exposed to this latest downshift.

The price collapse during the past few weeks ahead of the seasonal rise in crude oil inventories has left the market wondering whether global tanks will fill before the current low prices curb production. Overflowing tanks will force the price even lower while lower production combined with the prospect of strong demand will provide the support needed to establish a bottom in the market.

From bad to worse as Iran crushes crude