Commodity markets had a strong week with broad-based gains seen across a sector that has been under siege for quite some time. The Bloomberg Commodity index rose 2.4% with metals – both precious and base – putting up another strong performance.

Gold saw fading support from outside markets as the global market turmoil faded with strong gains seen across both emerging- and developed-market stocks. This including a very strong US job report, however, was not enough to spoil the party and gold reached a one-year high and returned to a technical bull market on the back of momentum and a softer USD, having bounced 20% off the lows. 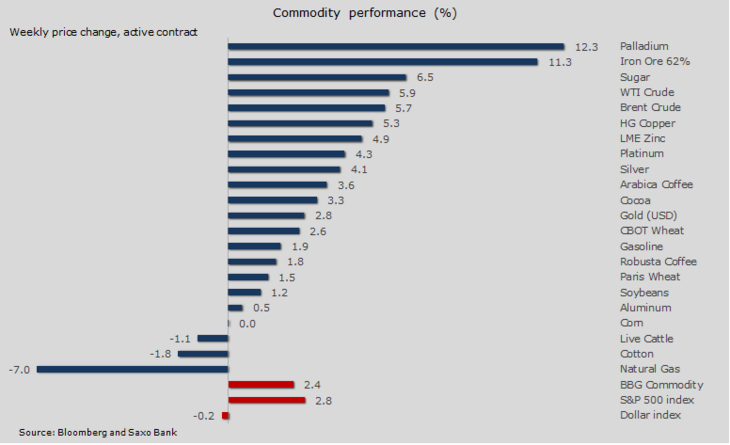 Industrial metals led by zinc and nickel have rallied strongly since the January low. The acceleration this past week was driven with particular force by a technical breakout in copper and hopes that the National People's Congress in China starting March 5 will see additional steps taken to prop up the economy of the world's biggest consumer of... anything metal.

Oil rallied for a third week as short positions continued to be scaled back with the outlook showing signs of improvement. Despite negative fundamentals, traders have found some comfort from a continued slowdown in US output, supply disruptions within Opec, and raised expectations that a March 20 meeting between Opec and non-Opec members will lead to the introduction of a cap on production.

One of my favourite quotes seen on twitter this past week was in response to another big build in US oil inventories which nevertheless led to the market finishing higher on the day: "Bear markets do not end on good news, they bottom when they stop going down on bad news".

Oil and other growth-dependent commodities such as base metals have indeed been moving higher without the full support of fundamentals, which remain challenged. Based on this, we caution investors against getting too carried away, but the current action is nevertheless a clear reminder of how markets can change direction well before the macroeconomic outlook improves.

Traders and investors are still flocking back to gold and any price dip has so far been viewed as a buying opportunity. Exchange-traded products tracking the price of gold have received more than $7 billion of investor money so far this year. This is the biggest rush into gold since quantitative easing was introduced by the Federal Open Market Committee in early 2009.

Describing the current flows into gold as being driven by the need for a safe-haven, however, no longer applies with the market turmoil in stocks and credit having faded of late.

Instead, we are seeing a situation where strong positive momentum has rekindled memories of the rally during the early parts of this decade. Worried about missing the boat, investors faced with negative bond yields and a no-longer-rising dollar have been looking for alternative investments. In gold (and to a certain extent silver), they have found it and the reward so far has been a rally of more than 20% since the FOMC raised its interest rate on December 16.

Gold may also be the canary in the coalmine, with the oft-prophetic bird trying to tell us that the improved market conditions seen recently will not last and that renewed weakness in stocks and credit could soon resurface.

If we do not see renewed weakness elsewhere, however, the gold rally will increasingly end up being driven by the fumes of an engine running on empty and that will eventually trigger a rethink, followed by profit-taking. 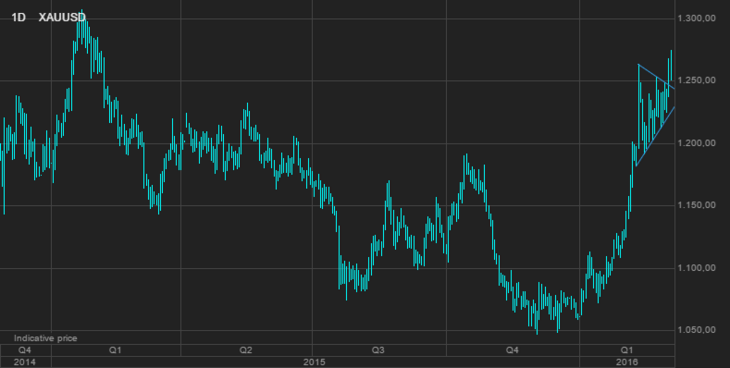 In the near-term, however, there is not much to be won by trying to fight the trend, not least considering how strong the demand for gold and the subsequent price action has been this year. Having broken clear of $1,250/oz, the next key and major level to look out for will be the 2015 high at $1,308/oz.

The downside is currently well-protected and it will take a break below $1,225/oz or more importantly $1,190/oz to change that view.

Crude oil continues to grind higher as the risk of another collapse fades. The improved sentiment has seen volatility fall to the lowest level seen since early January while speculative short positions have been reined in. The fundamental outlook remains challenged, at least in the near-term, but traders tend to look further than that for direction with recent developments having started to change the market's overall psychology.
US production is once again on clear downward trajectory after having fallen for the past six weeks. A stronger-than-expected seasonal rise in crude inventories still poses a challenge, particularly at Cushing, Oklahoma which is the important delivery hub for WTI crude oil futures. Inventory levels there rose by 1.2 million to 66.3m barrels, not far from capacity (which is estimated at around 73m barrels.

Opec and non-Opec producers plan to meet on March 20 when renewed attempts to agree on a production cap will be made. Disruptions to pipelines carrying around 600,000 barrels/day of oil from Kurdish-controlled areas in northern Iraq combined with outages in Nigeria triggered a slowdown in February which helped more than offset increased flows from Iran.

These developments have all helped to remove the focus on the $20/b "ultra-bear" projection while triggering a reduction in the near-record short position in WTI crude oil. Brent crude, meanwhile, has seen a big jump in the net-long position to a record last month.

(A record long exposure obviously needs to be followed up by continued strength, and so far the market has obliged...) 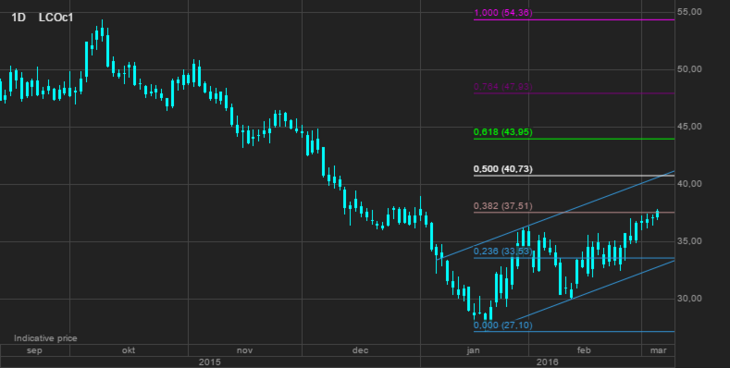 Brent crude has now breached resistance at $37.40/b, which is the first retracement level of the October to January selloff. A clear break above would open the path for an extension towards $40/b while the uptrend will only be challenged on a break back below $33/b.