The energy sector suffered its worst weekly setback since June 2011 as the imminent return of Iranian crude and milder weather in the US sent oil and natural gas sharply lower. These developments, combined with the ever-present Chinese growth worries, also had equity markets on the run with Asian stocks hitting 3½-year lows. 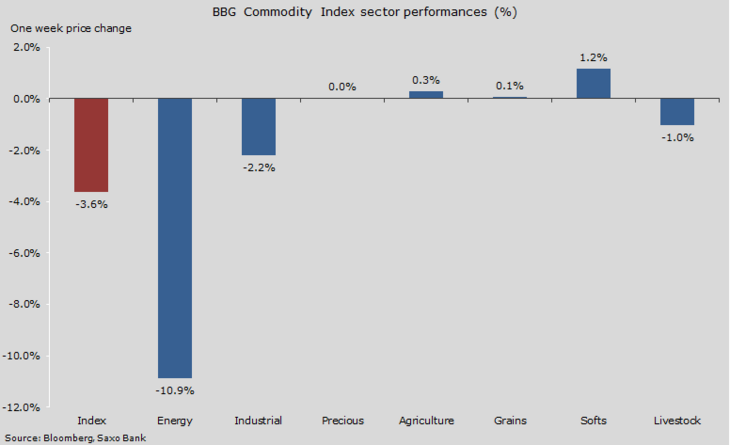 Industrial metals led by copper slumped and reached a new six-year low on demand worries despite data from China showing robust copper imports during December. Codelco, the world's largest copper miner, expects that supply will outstrip demand this year but rather than cutting production it is instead initiating plans to further cut the cash cost.

Key crops got an initial boost from news that US farmers have for economic reasons reduced their total winter wheat acreage by an area the size of Qatar. Booming global supplies, however, continue to keep the sector under pressure with most of the support coming down to periodic bouts of short-covering from funds holding large speculative short positions. 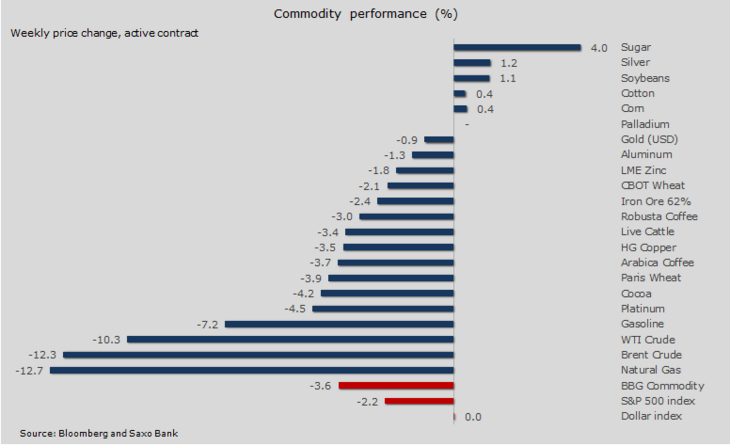 Crude oil remains the major story and the price has now slumped by one-third since the Opec meeting on December 4 ended in disarray. Chinese trade data earlier in the week helped reduce demand worries after imports in December surged to a record 7.8 million barrels, some 10% higher than the year before. This helped stabilise the price above $30/barrel for a number of days but news that sanctions against Iran could be lifted within days helped trigger renewed selling.

The question remains how quickly Iran can increase its production. A survey carried out by Bloomberg to which I contributed found that Iran is likely only to increase production by 100,000 barrels/day per month after sanctions are lifted and by 400,000 barrels in six months' time.
After years of sanctions and underinvestment we doubt that Iran can just turn up the volume and it will take longer than the market believes before full its potential is reached. If this turns out to be the case, it may eventually help oil to stabilise. 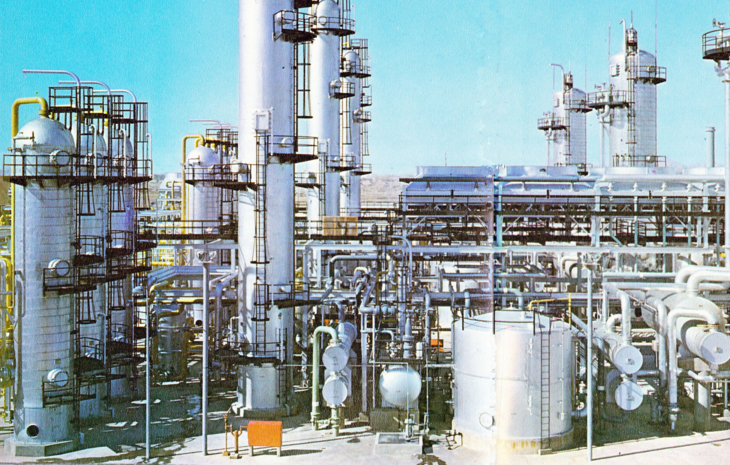 Iranian oil: A refinery in Aghajari: Iranian oil production is unlikely to pick up where it left off before the imposition of sanctions [Photo: Wikimedia Commons]

What is certain, however, is that an overhang of already-produced and now stored supplies in Iran will be looking for a home as soon sanctions are lifted. Mapping surveys from Reuters indicating that several very large crude carriers with capacities of two million barrels each are almost fully loaded and ready to set sail. This will apply some additional pressure in the short term, not least considering the limited success oil had in trying to establish support above $30/b during the week.

The impact of the extra barrels from Iran has already had a profound impact on the price relation between Brent and WTI crude as well.

Geopolitical risks and supply worries combined with rapid rising production in the US saw WTI crude enter into a discount against Brent back in 2010. The recent removal of the US crude export ban saw WTI and Brent merge. The extra barrels from Iran are now applying some additional pressure on Brent crude, the global benchmark.

As a result we have seen WTI crude regain its premium status all the way out to December 2017. 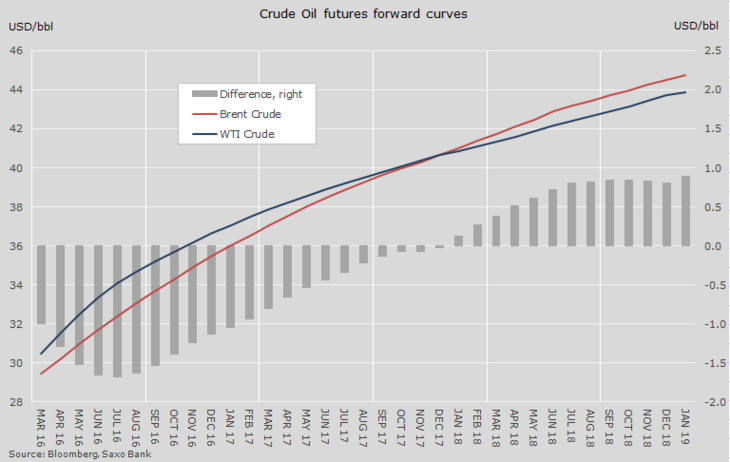 Rising supply from Iran and a second weekly surge in US inventories will continue to extend the time before demand catches up with supply. The Energy Information Administration's latest short-term energy outlook does not expect the first draw on global oil inventories before the third quarter of 2017.

Only a sharper-than-expected slowdown either forced through bankruptcy or agreed to by some of the major producers will bring forward the timing of the rebalancing. 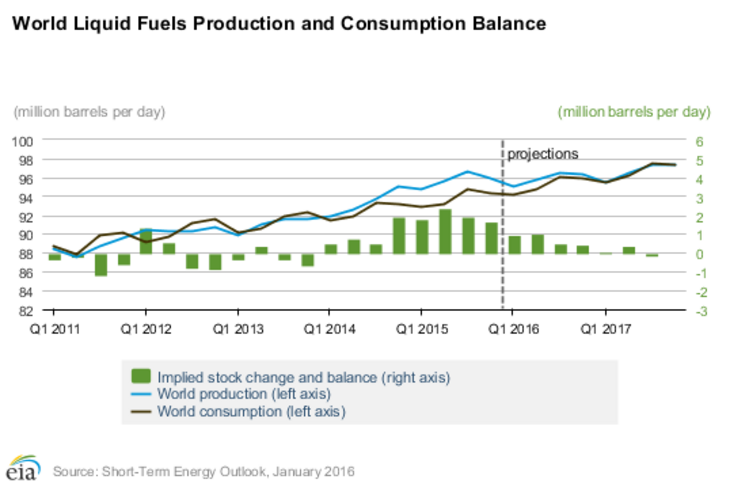 Where does leave the price of oil in the short term?

Technically, both Brent and WTI crude oils have reached oversold territory and are due some consolidation after slumping by more than 20% in two short weeks. But with the potential for additional barrels hitting the market from Iran and the call for $20 growing ever louder, the near-term direction is south.

Hedge funds are holding a record speculative short in the futures market and they continue to be joined by producers hedging further out the curve.

Gold remains one of the few assets in positive territory as the carnage in global financial markets is showing limited signs of slowing down. Short-covering at the beginning of the year from funds exciting overextended short positions was the initial driver, but during the past week investors increased holdings in exchange-traded funds by the most since last January.

With losses across other asset classes continuing to accumulate, gold is once again seen as the go-to commodity. 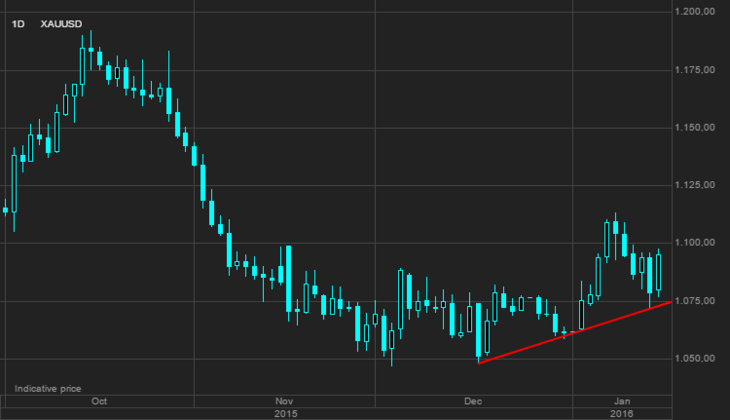 After finding support at the key level of $1,072/oz gold rallied into the weekend as the collapsing oil price continued to reassert downward pressure on global stocks. The risk-off sentiment also helped drive the euro higher against the dollar with traders reducing exposure in the popular EURUSD short trade.