In 2018, global insolvencies confirmed their upward trend which started in 2017 after seven consecutive years of sizable declines. Indeed, the Global Insolvency Index of Euler Hermes which covers 43 countries totalling 83% of global GDP is to post a +10% y/y increase for 2018, an estimation supported by the latest available data. All in all Euler Hermes expect 20 countries of the sample [of 43 countries in total] to see in 2018 more insolvencies than in 2017. Three factors explain this outcome: first, a weaker macroeconomic context for some countries; secondly the implementation of new types of insolvency procedures and the cleaning of business registers through the official insolvency procedures in a few other countries; and thirdly, but more significantly, the stronger willingness to use the insolvency framework in China.

In their view, the upside trend in insolvencies will continue in 2019 (+6% y/y). However, this outlook will reflect a more universal reason: the softening of the global economy to a too-low pace of growth. Most economies, notably the advanced ones, are expected to revert to and even cross their respective tempo of GDP growth which has historically proved to be necessary to stabilize the level of insolvencies (+1.7% for Western Europe). In other words, the experts of Euler Hermes expect economic growth to gradually become insufficient for a higher number of companies in a higher number of countries in regards to their production costs, (re)financing costs and structural challenges.  De facto, the lowering demand is increasing the vulnerability of companies with high-fixed costs and firms with larger inventories or working capital requirements issues. At the same time, the end of easy financing is increasing the vulnerability of debt intensive sectors and more globally of most indebted companies.

In this context, Euler Hermes foresee 2 out of 3 countries will post an increase in business insolvencies in 2019 (compared to 2 out of 5 in 2018) and 1 out of 2 countries to register more insolvencies in 2019 than observed in average over 2003-2007, before the financial crisis of 2008. Countries which exhibited a dynamic business creation over the past years would face an extra volume of insolvencies due to the young companies too weak to survive. 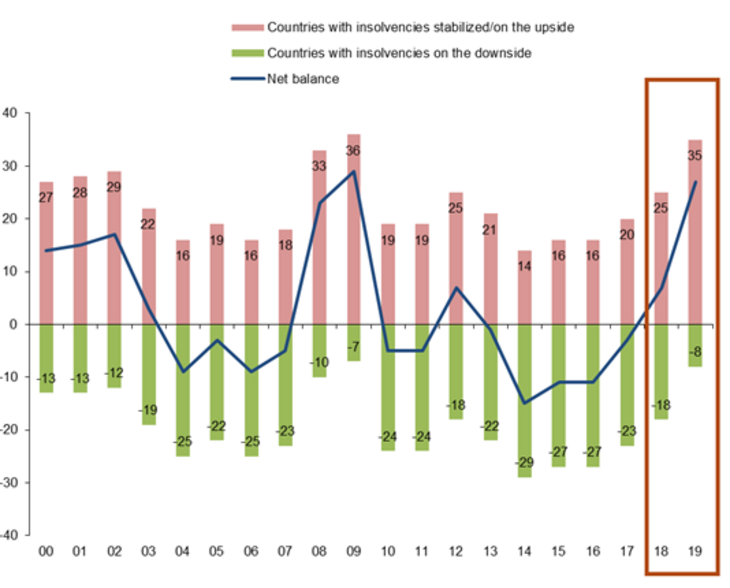 At the same time, the risk of recording major insolvencies remains high, and on the upside, while it has already significantly materialized in 2018. Indeed, the first three quarters of 2O18 pointed to another batch of 247 insolvencies of major companies - namely firms with more than EUR50mn in turnover. This represents a relatively stable number of cases compare to the same period of 2017 (-9 major insolvencies) but still a worsening severity in terms of cumulative turnover (+ EUR14.5bn to EUR105.8bn) which could have serious domino effects on providers along supply chains. In this regard, Construction (with 41 major insolvencies over Q1-Q3), Retail (39) and Agrifood (24) were the most concerned sectors in 2018, and the Western Europe (106), Asia (68) and Central and Eastern Europe (42) the most impacted regions.

All in all, this insolvency outlook calls for more selectivity and preventive actions such as stellar credit management practices. "It calls also for a closed monitoring of the political and policy-related risks which will nurture volatility all along 2019 even if we expect positive outcomes for most of them in our base line scenario (more details about our latest macroeconomic scenario)." said Maxime Lemerle, Head of Sector and Insolvency Research at Euler Hermes.

Western Europe: The bounce back engaged in 2018 will extent in 2019

In Western Europe, the downside trend in insolvencies recorded from 2014 to 2017 ended in 2018 with a +2% y/y rebound of the regional insolvency index. The latter results from various factors: (i) a noticeable upturn in the UK (+12% y/y), which confirms that Brexit-related uncertainties added headwinds on businesses despite the resilience of GDP figures; (ii) a stabilization in France, Spain and Belgium; and (iii) a sizable increase in the four Nordics (+10% y/y in Sweden, +13% in Norway, +19% in Finland and +25% in Denmark), which comes from economic and fiscal reasons and exceptional factors (the administrative bankruptcies of inactive companies in Denmark, a backlog of official insolvency data that created an artificially low base of comparison in Finland). At the same time, the remaining countries of the region registered slower declines in 2018, notably the Netherlands (from -23% to -6%), Portugal (-12%), Ireland (-10%) and Germany (-4%). In Germany, however, it is worth noticing two things: (i) some sectors already faced a rebound in insolvencies, notably the Construction industry (+2% ytd with 2,555 cases in the first nine months of 2018) and consumer-oriented sectors such as leisure (+2%), hotels and restaurants (+9%) and personal services (+14%); and (ii) the average severity of bankruptcies increased by +25% y/y to EUR1.5mn in terms of amount of debts to creditors as of September 2018 according to DeStatis. 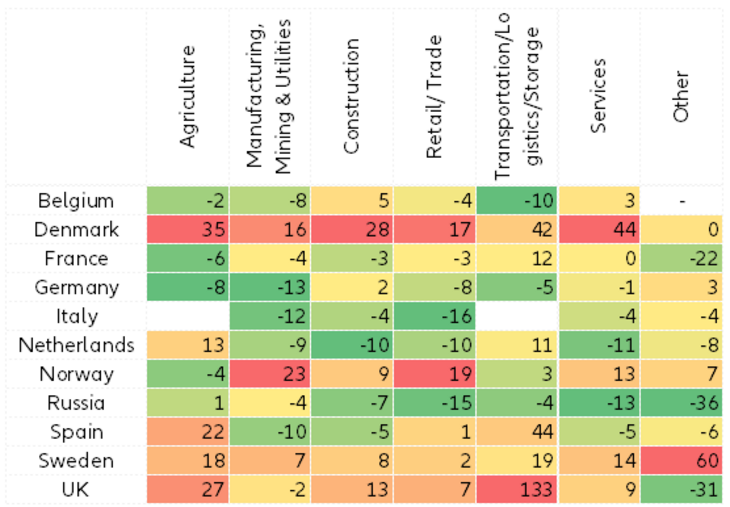 In 2019, Euler Hermes expect the softening economic momentum, with the tightening of monetary and financial conditions and more globally the negative impact from uncertainties (Brexit, international trade…) to drive up the number of insolvencies in the region (+3%).

The UK would see another uptick in corporate insolvencies (+9%), but will remain highly vulnerable to a disorderly Brexit which could lead to a +20% soar in insolvencies in 2019. France, Italy and Spain are set to post a trend reversal with a slight increase (+2%). De facto, the rebound in insolvencies has already been visible in France in the infra annual data since Q2 2018, notably in some sectors such as Construction, while margins and delays of payment have deteriorated at national level. In Italy, the increasing deterioration of growth outlook, with GDP to keep on softening from +1% in 2018 to +0.6% in 2019, and the rising pressure on banks and credit, will gradually materialized by more insolvencies. In the Netherlands and Germany, business insolvencies will stop their decline and record respectively 3,630 and 19,350 cases again in 2019, but both countries would be most affected by renewed tensions in international trade and the car industry in particular. De facto, Portugal and Ireland will be the major exceptions, with insolvencies remaining on the downside (-5% both).

In this context, Western Europe risks remaining a key contributor to the global list of top insolvencies, as has been the case in 2018, notably in the retail sector with 20 major insolvencies in the first three quarters of 2018, and big ticket failures notably in the UK, Italy and France, as well as in Agrifood (12 cases), Services (11) and Construction (11).

The region as a whole has seen a quasi-stabilization of business insolvencies in 2018, with a -1% decrease of the regional insolvency index, and should see in 2019 a +4% rebound to a five years high. Yet, this picture masks three clusters of countries.

Asia: A persistent boost from China

The surge in insolvencies in China will keep on driving up the regional (and global) insolvency figures. In 2018, business insolvencies have remained on a huge double digit growth (estimated at +60%) according to the available non-official data, thus confirming the official pickup posted in 2017 (+74% to 6,257 cases according to the Supreme People’s Court of the People’s Republic of China). "We expect another double-digit increase of insolvencies in 2019 (+20%)." said Maxime Lemerle, Head of Sector and Insolvency Research at Euler Hermes. The latter will result on one hand from the on-going softening and adjustments of the Chinese economy, notably in regards to credit growth, Belt and Road Initiative and international trade issues, and on the other hand from the increasing inclination to use insolvency procedures, in particular by the authorities, in order to clean the ‘zombie’ state-owned enterprises (exceeding 20,000 cases according to some studies).

At the same time, the insolvency experts expect business insolvencies to broadly stabilize in South Korea (from -6% in 2018 to 0%), Japan (respectively -2% and +1%), Hong-Kong (-10% and +2%) but to keep on increasing in Australia (+3% in 2019 after +2% in 2018), New-Zealand (respectively +6% and +1%) and, from a low level, Singapore (+10%). In India, 2018 will mechanically post a noticeable increase due to the gradual implementation of the new Insolvency law established end of 2016 for the whole country. Latest figures show a tempo of approximatively 800 cases annually, but it is not yet possible to determine if the Court capacities are playing a role at this stage.

In this context, Asia will register an increase of +15% of its regional insolvency index in 2019, after two large increases in 2018 (+37%) and 2017 (+33%). Interestingly, Asia was already a key contributor to the global level in major insolvencies in 2018, totaling 1 out of 4 major insolvencies over Q1-Q3 2018 after a noticeable increase in top insolvencies in the Construction sector, notably in Japan and India, in Energy and Agrifood.

North America: On the road to plateau in 2019

US insolvencies have reached a new low in 2018 after a ninth year of steady fall reflecting the robust performance of the economy in the past years and in particular the positive impact on businesses of the massive fiscal stimulus in 2018. Yet, this performance did not prevent the US from displaying 5 out of the 10 largest global insolvencies in terms of turnovers over the first three quarters of 2018, with several sectors facing huge challenges and competition due to digitalization/innovation, in particular the retail sector. It did not stop corporate debt to keep on growing – to a high share of investment grade corporate (35% of BBB in Q2 2018).

In 2019, the cooling down of the economy and the gradual tightening of credit conditions, should lead to a stabilization in business insolvencies, not mentioning the business creation re-engaged in 2012 which is mechanically generating some insolvencies of young companies, nor the lagging effects of the natural disasters that hit the country in 2018.
At the same time, Canada should see a slight increase only in 2019 (+4%) from the low level reach in 2018, so that the North America Insolvency Index would post a stabilization in 2019.

At a regional level, Euler Hermes expect insolvencies in Latin America to keep on growing in 2019 (+5%) for the eight consecutive year. However this outcome will result from the increasing trend in Chile (+13% anticipated in 2019) which is only gradually weakening since the new Insolvency law boosted insolvencies in 2014. The gradual acceleration of the economy expected in 2019 should contribute to a trend reversal in insolvencies in Colombia (from +25% to -10%) and to confirm the improvement in Brazil (-6% in 2019) where insolvencies struggled to diminish in 2018 (-3%) from the 10 years high reached in 2017.