Two-thirds of CEOs (66%) see more threats facing their businesses today than three years ago.  Just over a quarter (27%) believe global growth will improve over the next 12 months, a decline of 10 points on last year.

In addition, findings from PwC's Annual Global CEO survey show only slightly more than a third (35%) are very confident of their own company growth in the coming year, down four points on last year (39%), and even one point below 2013.

The results, in PwC's Annual CEO Survey – 'Redefining business success in a changing world' – underline a gloomy outlook for the global economy in the next twelve months. More than 1,400 CEOs were interviewed for the research, which was published at the opening of the World Economic Forum Annual Meeting in Davos, Switzerland.

China's economic rebalancing, crude oil price falls, and geopolitical security concerns are all impacting an overall increase in uncertainty about the global economy's growth prospects. Globally, only just over a quarter (27%) of CEOs think global growth will improve over the next 12 months, compared to 37% last year, while 23% think it will worsen (2015: 17%). Levels of optimism amongst North American CEOs is half that (16%) of the most optimistic regions (Western Europe 33% and Middle East 34%). Almost a third of China's CEOs (33%) believe global economic growth will slow down in 2016.

Confidence in businesses' own revenue growth for the next 12 months has also fallen (35% 'very confident' vs 39% last year). Against this tide of pessimism, CEOs in India (64%), Spain (54%) and Romania (50%) stand out as more optimistic.  The biggest turnaround is seen in Taiwan, where only 19% are very confident of short-term company growth, compared to 65% last year - an astonishing slump of 46 points. However, Switzerland has the lowest confidence with only 16% of Swiss CEOs very confident of revenue growth compared with 24% in 2015.

Looking at investment prospects, the US, China, Germany and the UK remain the countries CEOs view as most important for growth in the next 12 months. Mexico and the UAE have also entered the top ten in place of Indonesia and Australia.
Commenting on the survey results, Dennis Nally, Global Chairman of PwC, says: "There's no question that business leaders' confidence in both the global economy and their own company growth prospects has taken a knock. No matter what the business size, the threats it faces are becoming more complex, crossing the borders of geopolitics, regulation, cyber security, societal development, people, and reputation. There is a new spectrum of risk for CEOs that represents threats to both national and commercial interests. The pessimistic outlook for the year ahead is reinforced by the position of the US, China, Germany and the UK as being the most important for growth again.  The fact that CEOs continue to point to these 'safe havens' underlines the general uncertainty about where real growth will come from in the long term." 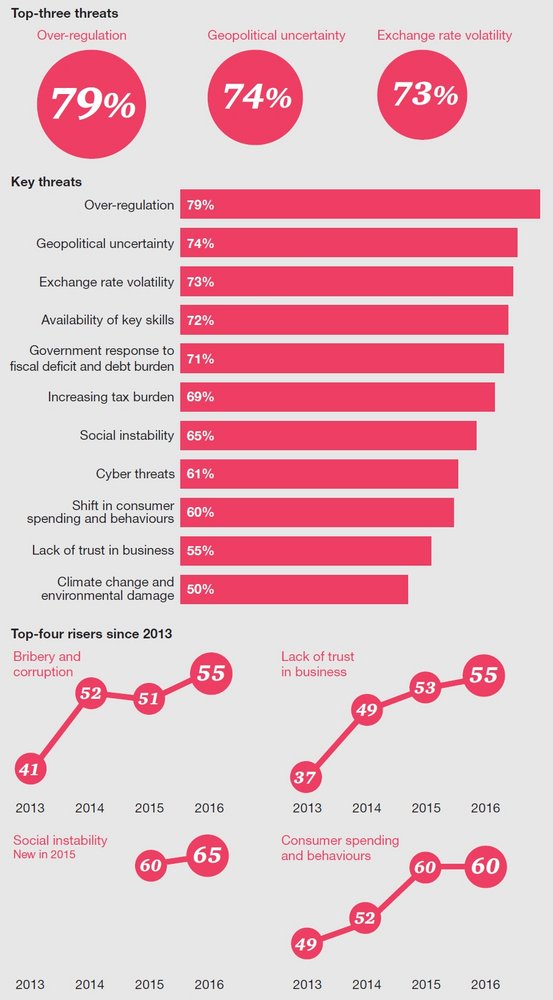 With heightened concerns about geopolitics, two thirds of CEOs (66%) now see more threats facing their business today than there were three years ago.

As in most years the spectre of over-regulation is seen as the top threat to companies' growth prospects, with 79% of CEOs citing this – the fourth year in a row that concerns about regulation have risen.  However geopolitical uncertainty has jumped from fourth in CEO concerns last year to second this year, cited by 74% of business leaders. As a result, concerns about availability of key skills have dropped from second to fourth, but remain a concern for nearly three quarters (72%) of CEOs. Worries about exchange rate volatility are in third place (73%).

Cyber security is also a worry for 61% of CEOs, representing threats to both national and commercial interests. Concern is highest amongst CEOs in the US, Australia and the UK (74%+) and in the banking, technology and insurance sectors. 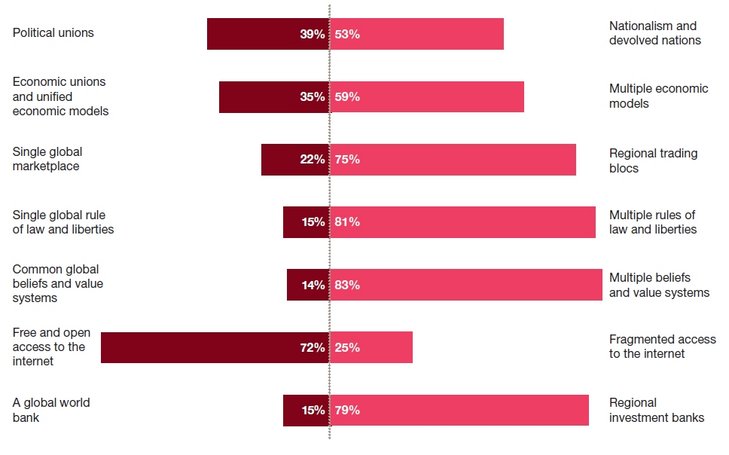 Figure 02: CEOs must navigate an increasingly complicated and multi-polar world [Question: For each alternative, please select the one that you believe the world is moving more towards] 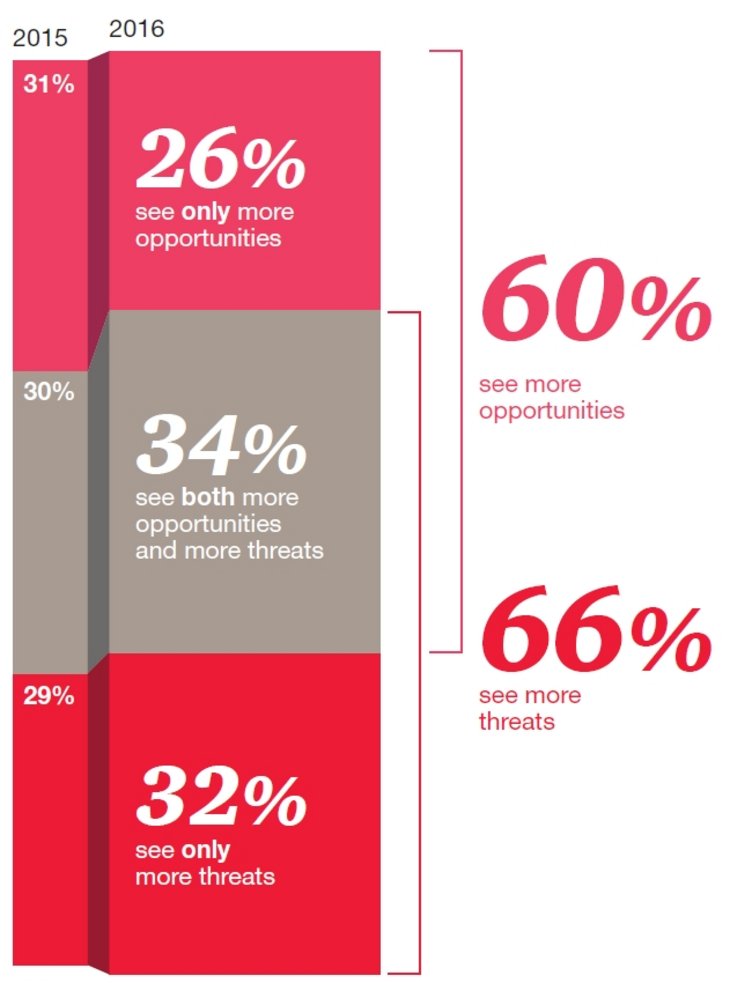 Figure 03: CEOs see more threats to their business today than three years ago [Question: To what extent do you agree/disagree that there are more growth opportunities/threats for your company than there were three years ago? Base: All respondents (2016=1,409; 2015=1,322)]

Concerns about the availability of key skills remains high (72%). Several sectors have particularly high levels of concern, topped by entertainment and media, and technology, while sectors more traditionally aligned with 'STEM' skills including manufacturing, pharmaceuticals and life sciences, also feature. Geographically, concerns are highest in Asia Pacific (81%), the Middle East (83%) and Africa (86%), and lowest in Western Europe (59%).

Nearly half of CEOs say they are changing how they develop their pipeline of leaders (49%), suggesting business leaders' recognition of the wider skills the next generation of CEOs will need to tackle a more complex environment encompassing technology, wider threats, and expectations of stakeholders for their organisations. Perhaps reflecting CEO's wider views on rising stakeholder expectations and business trust issues, 41% said they were focusing more on workplace culture and behaviours.

The top priority for government should be a clear and effective tax system, say 56% of CEOs, followed by a skilled, educated and adaptable workforce (53%), and infrastructure (50%) – both physical and digital.

However CEOs tended to not rate their governments highly – particularly around the effectiveness of the tax system, and income equality. Two thirds (67%) cite a stable tax system as being more important than low tax rates.

The survey underlines technology's force in business for change and better customer and stakeholder understanding.

Nine out of ten (90%) CEOs say they are changing how they use technology to assess customer and wider stakeholder expectations, and deliver against them. The most significant levels of change are reported in sectors with traditionally high customer service expectations including banking and capital markets (90%), insurance (95%), hospitality and leisure (94%) and healthcare (93%). Overall, more than three quarters (77%) believe technological advances will have transformed expectations of businesses over the next five years.

Data and analytical tools, and CRM systems are seen as having the greatest return for stakeholder engagement. This is followed by R&D and innovation cited by 53% of CEOs globally, with CEOs in Taiwan (76%), Brazil (72%) and Germany (67%) prioritising it higher than the global average.

Internally however, technology & data analytics still has untapped potential. In talent management, only 4% report using predictive workforce analytics, and 16% use it to focus on productivity.  Concerns about the speed of technological change as a threat to growth prospects is being felt most acutely in the banking and capital markets sector (81%), 20% higher than the global average (61%), followed entertainment and media (79%), and technology (66%) sectors – mirrored in CEOs concerns about skills in these sectors.

Trust and purpose in business

This year's survey examines how CEOs are preparing to respond to changing customer and wider stakeholder expectations of business. 59% of CEOs say businesses need to do more to communicate their purpose and values.

Trust is certainly a concern, as CEOs consider changing stakeholder needs.  More than a half (55%) of CEOs are concerned about the lack of trust in business, compared with 37% just three years ago.

But there are barriers to responding to changing expectations. Many CEOs (45%) say additional cost is stopping them from taking action to respond to greater expectations. Unclear or inconsistent standards and regulations, cited by 42% of CEOs, is also a significant barrier.

In five years' time, more than three quarters (77%) believe technological advances will have transformed expectations of businesses on communication, reporting, investment and planning. In addition, 71% of CEOs believe that in five years' time, successful companies will be guided by a purpose centred on creating value for wider stakeholders. 87% say companies will prioritise long-term over short-term profitability. Overall they believe that customer and other stakeholder needs will be more important than shareholders' in successful organisations. 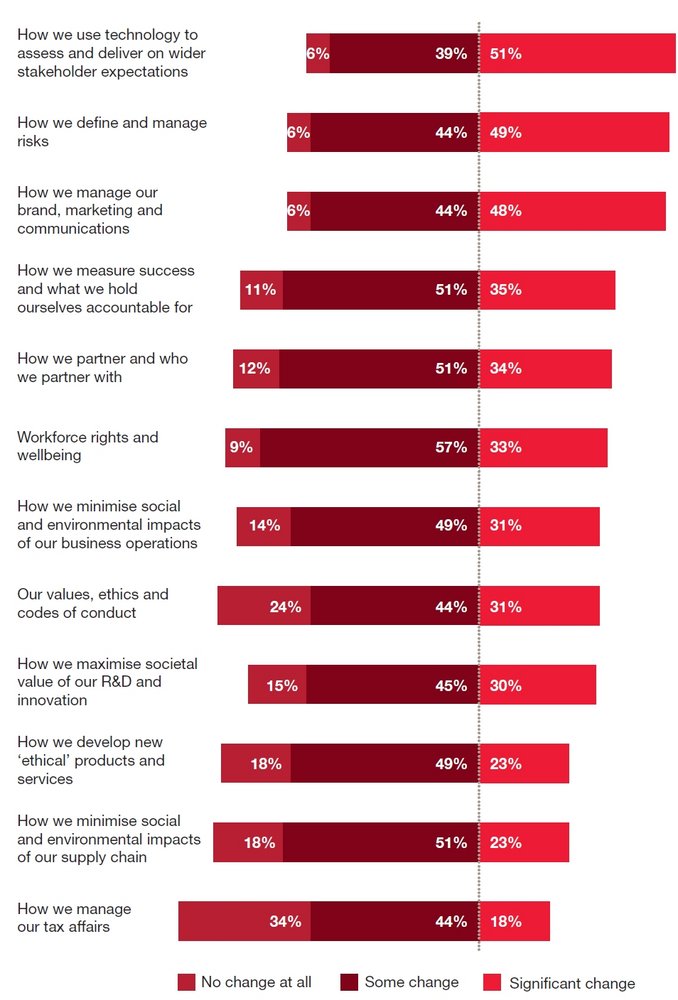 In the shadow of risks there are also opportunities