Since the international growth scenario announced by Coface last March, prospects have deteriorated slightly, and growth would appear to remain below 3% in 2016 for the 6th consecutive year. Companies have been penalised by this atonic "Japanese-style" environment: a lack of outlets and weak inflation reducing pricing power. The clear increase in corporate risk around the world has been confirmed by Coface’s latest country risk assessments. The average assessment for all 160 countries has reached a peak level, unseen since the early years of the century, corresponding to B, "significant risk" level.

The world's three largest economies have been affected by aggravated credit risk: after the downgrade of Japan to A2 last March, it is now the turn of the United States and China, downgraded to A2 and B respectively.

In the United States, companies are facing cyclic problems: the post-crisis recovery point has been reached and led to a rise in business insolvencies for the first time since 2010. Companies facing falling profitability and reduced investment levels underlie the continuous drop in unemployment.

In China, despite stable growth, stimulus measures are proving to have a limited effect due to overcapacity and excessive corporate debt levels.

Unsurprisingly, this shock wave is spreading, to Canada on the one hand, downgraded to A3, and to several Asian countries on the other hand. For this reason, the assessments of South Korea, Hong Kong, Singapore and Taiwan have been downgraded to A3, and Malaysia to A4. These countries suffer from strong exposure to the Chinese structural slowdown for exports, tourism and investments. Furthermore, volatility on commodity markets, including oil, is penalising corporate business.

Investment is climbing in Europe, however, political risks are increasing

Political uncertainty in Europe is weighing on the confidence levels of businesses and households. Following on from the Brexit vote, Coface has revised its growth forecast for British GDP by 0.6 points, to 1.2% for 2016. Export segments taking advantage of the low sterling rates are not the worst off. On a long-term basis, a "Norway-style" free trade agreement appears unlikely after the resignation of David Cameron and, if WTO rules are applied, the economic cost could be high for the United Kingdom and the EU. British export sectors, tied to the EU by supply chains, could be penalised by customs duties. Within the EU, countries with a limited domestic market and priority commercial relations with the United Kingdom face the highest level of exposure: Ireland, and to a lesser extent, the Netherlands, Belgium, Denmark and Sweden.

At the current time, no effect is expected on the healthy dynamic growth within the eurozone (forecast at 1.7% in 2016), fed by both household consumption and private investment. Relaxed budgets, decreased oil prices and the low rates of the ECB have had positive effects on the margins of businesses. Small businesses are benefiting from a wider range of bank loan services for the first time.

France has been upgraded to A2, in response to several encouraging signals: the highest level of investment by businesses in the last 4 years, a boost in the construction sector (which represents 5% of GDP), and a constant drop in the number of insolvencies estimated at -3.2% in 2016.

Italy has been upgraded to A3,due to falling insolvencies levels and unemployment and expected increased investment.

Central Europe lies in the positive wake of Western Europe, with upgraded assessments for four countries: Lithuania (A3), Slovenia (A3), Latvia (A4) and Romania (A4), taking advantage of solid growth and reduced export dependence on Russia.

The effects of the fall in oil prices is continuing to be felt within oil-exporting countries. Saudi Arabia (new rating B), Kuwait (A3), Qatar (A3) and Algeria (C) have seen their public deficit expand and non-hydrocarbon business slow. This also applies for Angola and Zambia (D), subsequent to the depreciation of their local currency due to the Chinese slowdown and the collapse in commodity prices, and Mozambique (D), facing a highly probable payment default. 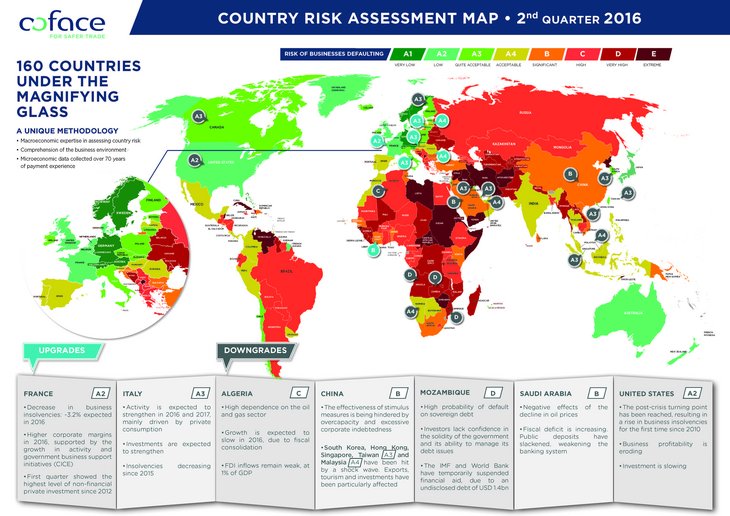