Commodities were back on the defensive for a second week running with China growth worries, a stronger dollar and high inventories of key commodities such as oil and aluminum continuing to drag on the sector.

A surprisingly dovish statement from the European Central Bank, however, has primed the market for additional stimulus helping to reduce some of the negative sentiment across the board, not least among precious metals.

The biggest market moving event turned out to the ECB's monthly meeting. While leaving rates unchanged, bank chief Mario Draghi was very dovish in his comments particularly in his outlook for global growth which is still slowing.

China's official growth, in fact – which dropped below 7% in September – helped trigger another rate cut from the Peoples Bank of China and the combination of these events provided some support, particularly to precious and industrial metals.

The message about fading global growth was also brought home by the world's biggest shipping company, A.P.Moeller-Maersk, which on Friday issued a sharp profit warning. The downgrade was driven by a deteriorating outlook in the container shipping market where falling volumes and overcapacity have seen the benchmark container rate decline by half since January to a record low at $920/40 foot container.

With additional quantitative measures from the ECB now increasingly likely in December, as well as the Chinese rate cut, we could see other countries such as Japan, Norway and Australia introduce further measures to stimulate their economies.
With the prospect of a stronger dollar this leaves the potential for aggressive tightening from the US Federal Reserve much reduced. This will eventually support growth-dependent commodities and, in the near-term, investment commodities such as precious metals. 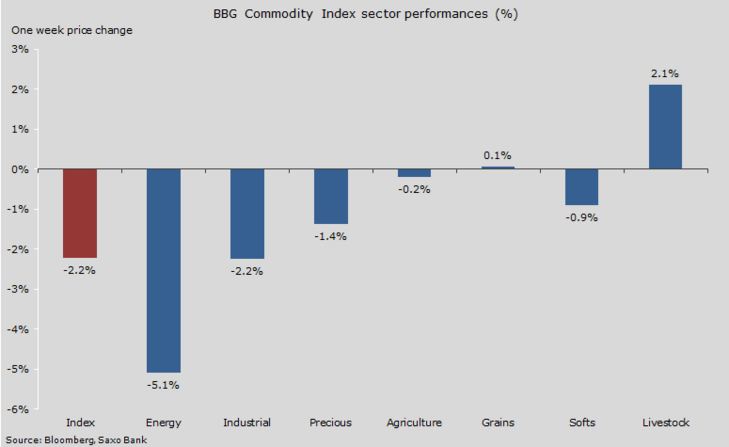 The Bloomberg Commodity index traded lower for a second week, largely driven by continued weakness in energy where rising US inventories and China growth worries saw the price of both WTI and Brent crude test the lower end of the current ranges while gasoline hit a new six-year low.

Industrial metals began the week on the defensive following disappointing Chinese growth data but China also helped give the sector a boost when it cut the one-year lending rate by 25 bps.
Before the cut, aluminium was under particular pressure and just like gasoline it hit a fresh six-year low before recovering. Surging supply from China and other producers leaves this market increasingly oversupplied and the prospect of a price recovery is slim at this stage. 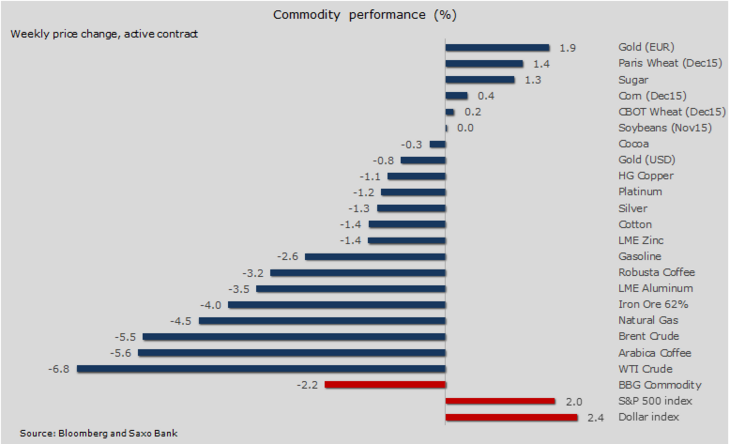 What a difference rain can make! This was made perfectly clear by the price movements seen among the soft commodities.

Sugar and Arabica coffee ended up at opposite ends of the performance table. as rain in Brazil increased the prospects for next season's coffee crop while delaying the current sugar cane harvest. In addition, we are seeing increased El Nino worries and this could negatively impact the upcoming sugar production in Indonesia, Thailand and Australia.

In Europe, only Portugal and Greece now offer a positive yield on two-year government bonds. In such a low- or negative-yield environment, precious metals have managed to attract some new attention from investors – especially those based in euros.

As a result euro/gold reached a new three-month high while dollar/gold found support from the prospect of additional stimulus measures being introduced, not only in Europe and China but also elsewhere.

The technical outlook for gold has continued to improve since a low point was reached back in August and the latest surge to $1,192/oz has forced many trend- and momentum-following hedge funds to get back in.

The weekly data from the US Commodity Futures Trading Commission covering speculative positioning among hedge funds and money managers shows this change.

After seeing the first net-short position on record back in August, buyers began to emerge. First those covering short positions (red line) and more recently we have seen longs increase as well (blue line).

During the past four weeks up until October 16, bullish futures bets have increased by 76,000 lots or 235 tonnes while total holdings in exchange-traded products backed by physical gold have risen by 2.1% or 31 tonnes during this time. 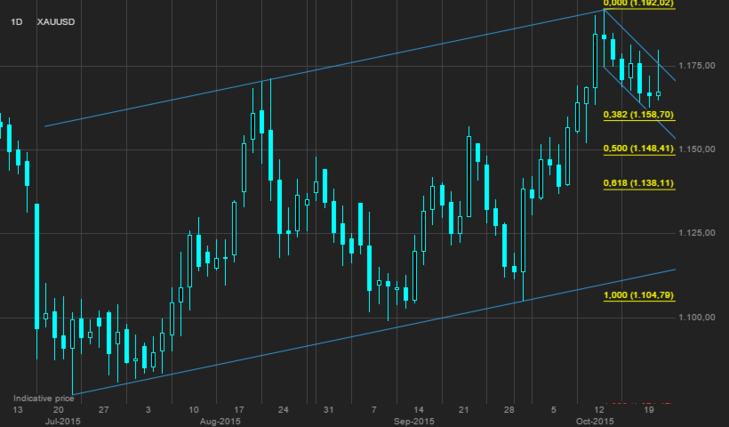 Despite some weakness this week, the technical picture looks healthy. The chart above shows the prospect of a bull flag providing some additional technical support but the stronger dollar remains a major obstacle.

The LBMA conference – the biggest annual industry conference for precious metals – was held in Vienna this past week. The tone was cautious with the industry still adapting to a period of lower prices but despite the continued weakness in recent months the sentiment was not overly bearish.

When polled at the end of the conference the delegates showed a particular bullish sentiment towards silver and palladium.

In the case of silver they saw it higher by 12.5% to $18/oz in a year's time while gold was expected to head slightly lower to $1,160/oz. Silver is often found as a byproduct from the mining of other metals such as copper, zinc and gold.

The production cutbacks of copper and zinc recently announced by Glencore and BHP Billiton combined with the expectations of others to follow suit could result in a supply deficit next year. 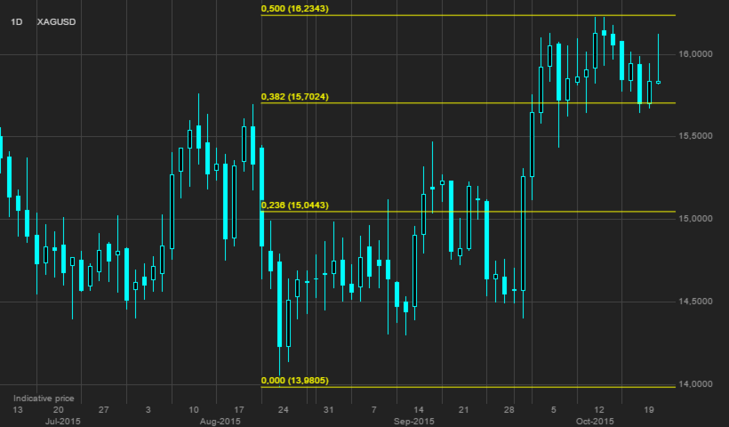 Crude oil continue to settle into the range that has prevailed since early September. With Opec showing no signs of yielding space to additional Iranian barrels once sanctions are lifted, the rebalancing process will continue to be a long, drawn-out process.

This is particularly apparent considering the current season of low refinery demand which this week saw US inventories move 110 million barrels above the five-year average.

US production continues to defy gravity with producers maintaining production from an ever-dwindling number of wells. While production is expected to slow and to become a major contributor to the rebalancing process, Opec members must be worried about the resilience shown.

If US production does not continue to slow down, Opec will have to find a way to make room for increased supply from Iran within a few months.

Failure to do so carries the risk of sending the oil price even lower and considering that current levels are low enough to slow non-Opec production, an even lower price would be totally unnecessary and would only create further havoc among producers.

In the short-term we see the market continuing to stabilise but a failure to hold above $44.5/barrel support on WTI crude oil would attract renewed selling from hedge funds who have almost halved their bearish bets during the past couple of months.

WTI crude struggling to hold onto support despite news about additional China stimulus: 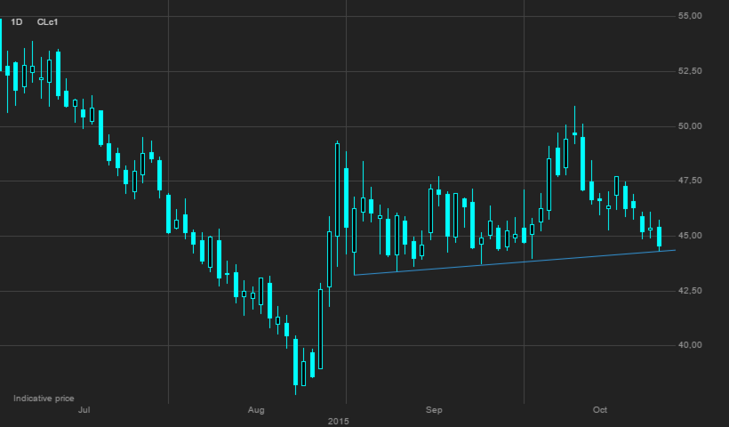