In front of the hip hop stage of the open air festival „Rheinkultur“ the atmosphere was aggressive. Various incidents, especially physical clashes between rival youths, had already occurred. When the performance of the next HipHopper (characteristically called "Haftbefehl" or in English „arrest warrent“) was cancelled due to safety concerns, the atmosphere was boiling over: The stage was stormed by numerous rioting youths and the equipment was damaged. A huge public address system mounted on reels was plunged from the stage into the audience - a miracle that there were no seriously injured (impressive pictures on YouTube under "Rheinkultur Randale"). Only the police use of pepper spray and service dogs was able to pacify the situation.

In the case of unplanned operations, the question naturally arises from the police perspective as to how far the undesirable development could not or even had to be recognised at the time of planning the operation. This is because the legal mandate for danger prevention and criminal prosecution also includes the obligation for the police to take tactical measures to counteract the potential risks to the success of the operation. In practice, however, critical reflection largely relates to the mission-related circumstances and decisions, not to the fundamental questions about the methodology used in mission planning.

Police operational planning is designed as a process model, the so-called planning and decision-making process for operations (PEP). Between the gathering of information and the final decision on a particular course of action lies the so-called assessment of the situation. It is the core of police operational planning. The relevant police regulations (PDV) therefore describe specific requirements for assessing the situation. However, it does not specify the methodology to be used for assessing the situation. However, the procedure currently used in the police force has weaknesses (lack of documentation, unclear handling of interactions, compatibility deficits, etc.), so that it seems necessary to consider alternative approaches to conducting a police assessment of the situation.

The search for alternatives

A research project was therefore carried out to investigate which methods of risk management could be adapted for police operational planning. As a promising approach the FMEA moved into the focus of the consideration. But why the FMEA out of all approaches?

As is generally known, the general aim of the method is to detect all potential errors in advance and to correctly assess the associated risks. Subsequently, the occurrence of damage should be avoided or its consequences reduced by appropriate countermeasures. If the concept of failure is broadly defined here and used synonymously with weakness, deficiency or source of danger, this can also be applied to the police context. As an aid to assessment, it may well be mentioned that the method is described by renowned experts as universally applicable, which "will one day be used by [...] all people of all fields who think in a preventive way" [see Werdich 2011].

The appeal of using FMEA, especially in the context of planning large-scale police operations, lies in the fact that it enables the numerous risks to be weighted and weighed up against each other. After all, the mere identification of risks does not allow any reliable conclusions to be drawn about the criticality of the success of the deployment. If the process were to continue unreflected, this circumstance would lead to control measures being taken for every conceivable deployment risk. As a result, the police organisation would quickly reach its performance limits or be overtaxed. The evaluation result within the FMEA now provides the police leader with information about which of the identified risks should be prioritized. A further advantage of FMEA is the possibility of being able to assign individual control measures and responsibilities to each identified risk and then reassess the identified operational risk. This promotes effective and efficient deployment preparation. In short, the use of the method is a must in the context of police deployment planning.

For this reason, an attempt was made to create an FMEA for a large-scale police operation. In implementation, a police FMEA could then look like the following. The facts mentioned at the beginning shall serve as an example here.

First, a structural analysis was created. The open-air event was named as the superordinate system element. From the perspective of the police, the purpose was to protect the event and thus ensure that it could run unhindered. If this were not ensured due to certain "failures", this would have an effect on the follow-up level, in this case on the open-air event. Of course, various elements could be the cause. Besides the spectators, as can be seen in figure 01, there are of course also the police forces. Here, a differentiation of the emergency forces from the point of view of the organizational structure for coping with emergencies was made. 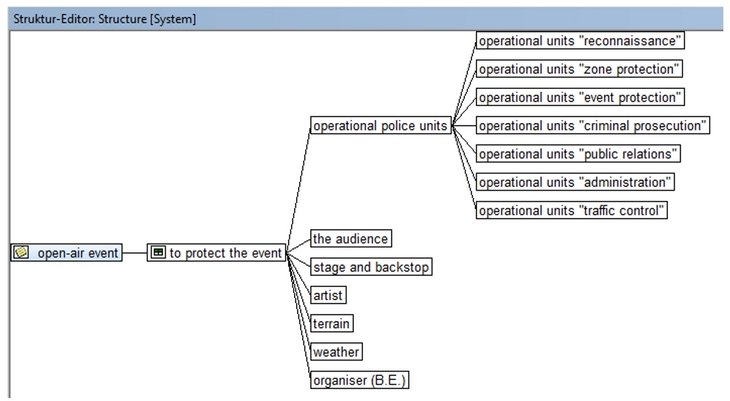 Furthermore, a functional analysis was carried out. The focus here is exemplarily on the concrete function of the police to intervene in critical conditions at the event. This can be achieved by different measures, as can be seen from the function network. Thus, the risk assessment plays a major role in identifying critical conditions. In order to ensure a well-founded risk assessment, various reconnaissance measures - listed as examples - must be carried out at the event location, on arrival and departure routes, etc. 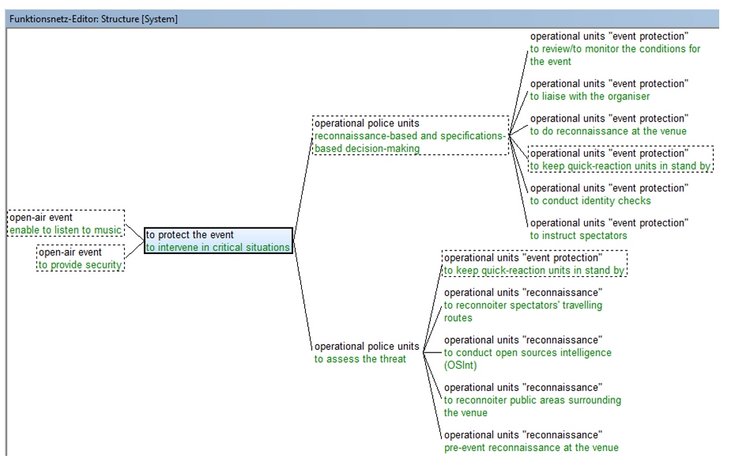 Of particular interest from a police point of view is the failure analysis. At an open-air festival – depending on the stage program - one has to assume an aggressive, sometimes alcoholized audience. The fact that spectators could storm the stage is not usually a factor in the risk analyses of the organizers. In view of the experiences in front of the hip-hop stage of the open air festival Rheinkultur, the "failure" (in police terms rather the "course") was included in the failure analysis of the FMEA and the failure effects of the corresponding system elements were named. Since the timely detection of the failure/course is the police objective, a corresponding function ("assessment of the danger situation") was assigned to the police task forces. Subsequently, error reactions were identified which could, for example, result in support for security personnel. 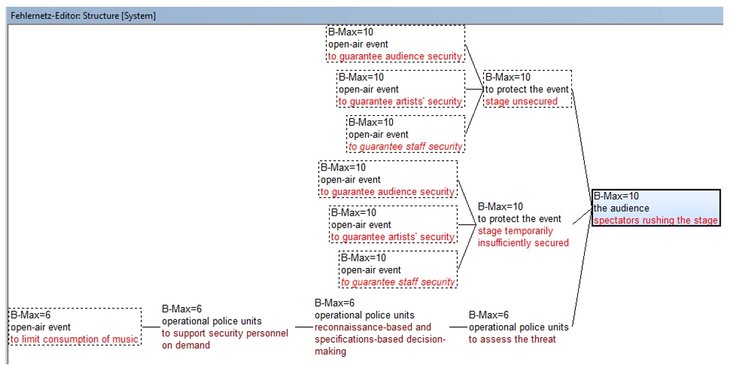 On the corresponding FMEA form sheet, here only a small section of the first analysis steps, action groups were created. Actions that are taken before the event begins were assigned to the action group "preventive" and actions during the event were assigned to the action group "corrective". In this way, a corrective measure would, depending on the results of the clarification, possibly mean the provision of intervention forces as specified in the functional analysis. 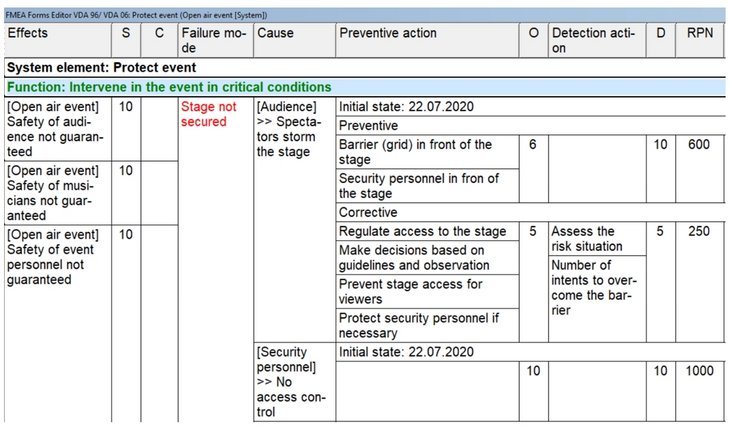 Figure 04: Overview of measures (excerpt from the form)

From today's point of view, it is no longer possible to answer the question whether a stage storm, such as that which occurred at the open-air festival Rheinkultur, would actually have been prevented by a deployment planning using FMEA. What is certain, however, is that the most varied, even so far unlikely, courses of events can be systematically identified, documented and taken into account in the decision-making process. In the police planning process this scenario could at least have been considered and preventive measures could have been considered.

However, it should not be ignored that the creation of an FMEA is consistently described as complex. In the police context, this plays a major role, since the FMEA would not be used as a basis for the production of thousands of products, but only for the execution of one (!) police operation. Therefore, the intensity of the use of the method should be placed in the context of complexity and potential damage. In any case, the added value here is likely to lie primarily in systematic knowledge management, in which know-how about process-related interrelationships and phenomena-related risks is secured. 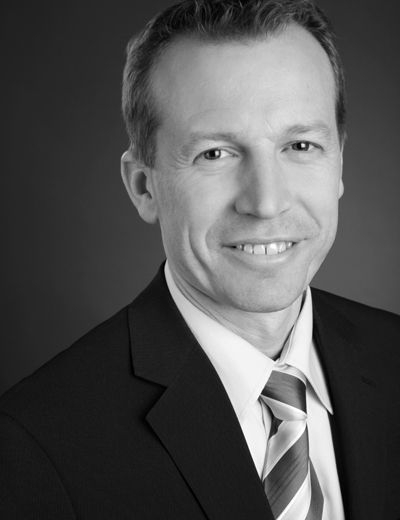 The P-Diagram, a supporting tool, or the complete confusion?

What scenarios cause you sleepless nights?
Related articles
Risk Academy