Throughout history, the "greater fool" trade has coincided with market peaks. During these periods, investors have continued to pour money into overvalued securities with little to no chance of long-term gain, hoping to find a greater fool to buy these securities at an even higher price. Although these trades can work as long as sentiment remains high, over the long term, they usually turn out to be "widow makers" – risky investments with large losses. The latest example could be found in German Bunds.

On the heels of the global financial crisis, Bunds became the preferred "safe-haven" destination in a troubled eurozone. Already low yields continued to fall dramatically from early 2014 until the yield on 10-year Bunds closed at 0.08% on 20 April 2015. Factoring in even slightly positive inflation, investors were likely locking in negative real yields by owning these bonds – that is, creditors were actually paying Germany to borrow their money. It was only a matter of time before sanity returned to the market: Over the past three weeks, yields on 10-year Bunds have risen, settling at 0.72% on 13 May.
Several theories about what caused the selloff have circulated — from worries over global reflation and a Greek debt default to a violent unwind of overly crowded secular-stagnation trades and the anticipation of a messy UK election result. In our view, no single factor caused the dramatic move in Bund yields. Investors in aggregate realized that the compensation for owning Bunds had dropped too low, and the market repriced to more reasonable levels.

For all the discussion about the risk of contagion from a Greek debt default, we suspect that a more insidious risk lurks in the prevalence of low interest rates across the globe. The low-yield environment has spread from Germany to Sweden, Denmark, Switzerland and other developed markets (see Exhibit 1).

Several factors have driven this trend. Perhaps most notably, some traditional buyers must buy sovereign bonds from a small and declining pool of highly rated issuers. This has put downward pressure on yields in a number of core and northern European debt markets.

Looking back over history, positive starting bond yields have provided an important buffer in contributing to long-term total returns. For many investors, owning bonds with negative real yields serves as a formidable headwind. Over time, the greater fool approach rarely prevails, and a painful reckoning often follows periods of market excess.

The recent German Bund selloff has extended to other bond markets around the world. Putting this move in context, the 65 basis point move in 10-year Bunds represented a significant repricing, while the 25 basis point spike in 10-year US Treasuries over the past month — though headline-worthy — represented a less abnormal move by historical standards. The increase in US Treasury yields might seem meaningful given the dearth of notable interest rate fluctuation over the past 18 months, but in fact recent rate volatility looks comparable to what we’ve experienced on multiple occasions since the global financial crisis unfolded (see Exhibit 2). 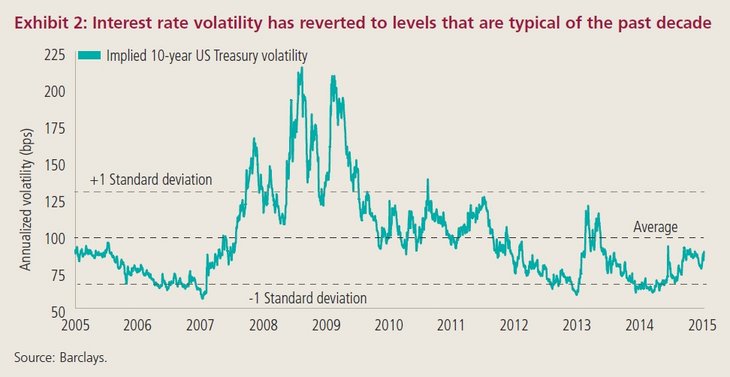 Some have argued that the US Federal Reserve and other major central banks have engineered the current bull markets for bonds and equities. Although monetary accommodation has provided major global economies with some much needed time to heal, these policies have created an environment in which bonds may not serve as ballast to equities during the next stock market downturn. In fact, we could see a situation in which equities and bonds sell off in tandem.

Nevertheless, with tepid inflation, weak global growth and broad-based central bank asset purchases, we are unlikely to see an environment in which bond markets spiral out of control. Fixed income markets may witness heightened volatility, but given the global macroeconomic backdrop, we believe a collar will probably limit the extent to which rates rise.

Overall, we continue to see more value in the credit space than in sovereigns. Valuations in higher-rated high-yield securities look reasonably attractive, along with intermediate credit quality corporate debt. While compensation for duration — or interest rate — risk appears minimal, taking on credit risk seems to be the more worthwhile bet in today’s environment.

Among developed market sovereigns, we still find some compelling opportunities in the US, Canada and the UK, as well as smaller markets like New Zealand and Norway. When the Fed begins to raise rates, however, US yields may increase further, which could spill over to other bond markets.

In emerging markets, there are fears of another bond market tantrum – a repeat of 2013. But many countries hit hardest in that selloff — namely India and Indonesia — have new market-friendly governments that have made considerable headway in repairing their balance sheets over the past two years. Some countries that might suffer this time around include oil exporters impacted by lower prices — for example, Venezuela, Angola and Ecuador. Generally speaking, we favor high-quality corporate issuers in countries such as Mexico, Chile, Peru and India.

Investors deserve compensation for taking on duration risk, but today that compensation looks thin. The selloff in Bunds has highlighted the latent risk of owning sovereign bonds with minimal reward offered for the embedded interest rate risk. In this environment, taking on credit risk and owning certain higher-quality emerging market corporate bonds looks more appealing. While markets may sometimes seem to price securities based on the greater fool theory, we believe that cooler heads will prevail over time.

We need a new systemic approach