The CFS Index, which measures the condition of the German financial sector on a quarterly basis, increased significantly in the last quarter of 2014. It rose by 4 points to 115.4 points and reached its highest level for more than three years. The increase can mainly be attributed to a positive development of revenues and earnings of financial institutions and service providers in the German financial sector. Moreover, financial institutions increased their headcount in the fourth quarter of 2014 and stopped the downsizing from the previous quarter.

"The clear increase in earnings in the fourth quarter of 2014 is a very encouraging sign in view of the current situation of the German banking sector," Professor Jan Pieter Krahnen, Director of the Center for Financial Studies and academic head of the survey, comments. 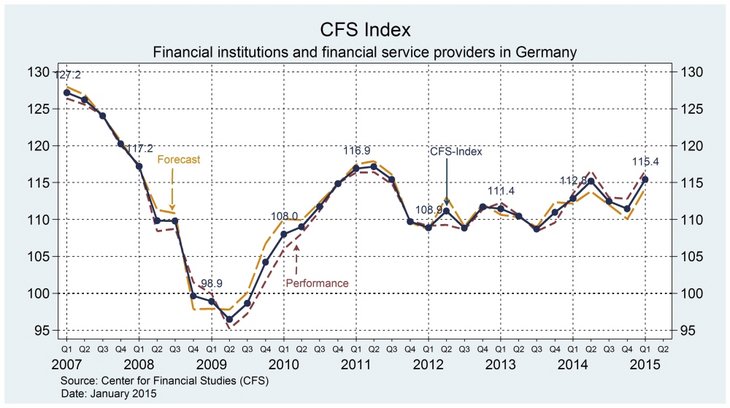 Earnings of financial institutions and service providers showed a very positive development during the fourth quarter of 2014 and exceeded the expectations from the previous quarter by far. The corresponding sub-index reached a level of 116.5 points after an increase by 10.4 points. Service providers also reported a positive growth in earnings after a decline in the previous quarter. The sub-index earnings climbed by 9.3 points to 124.8 points for this group.

Among financial institutions, the sub-index investments in product and process innovations increased by 2.7 points to 110.4 points, contrary to the expectations from the previous quarter. Service providers reported a slightly lower growth in investment volume. The corresponding sub-index fell by 2.8 points to 115.7 points. For the current quarter expectations are less optimistic among both groups.

The surveyed financial institutions increased their employment level in the fourth quarter of 2014 and stopped the downsizing from the previous quarter. The corresponding sub-index gained 7 points and reached a level of 104.3 points. However, financial institutions do not expect this development to continue during the current quarter. Service providers also hired new staff during the fourth quarter of 2014. Although the corresponding sub-index went down by 3.5 points, it remained on a high level with 114.5 points.

The international importance of Germany as a financial center, that has been assessed as positive for a long period, is almost reaching its highest level since 2007. The corresponding value increased by 5.9 points to 124.8 points.

About the Center for Financial Studies

The Center for Financial Studies (CFS) conducts independent and internationally-oriented research in important areas of Financial and Monetary Economics, ranging from Monetary Policy and Financial Stability, Household Finance and Retail Banking to Corporate Finance and Financial Markets. CFS is also a contributor to policy debates and policy analyses, building upon relevant findings in its research areas. In providing a platform for research and policy advice, CFS relies on its international network among academics, the financial industry and central banks in Europe and beyond.

About the CFS Index

The CFS Index is compiled from a comprehensive quarterly survey among 400 decision makers in the German financial sector (return about 50% on average). The survey contains four questions about the participant’s view on different business parameters (business volume, earnings, employment level and investment volume in product and process innovations). The answers to the questions may be given as “positive”, “neutral”, or “negative” and a response is requested for the previous and the current quarter. Due to construction, the maximum index value is 150, the minimum index value is 50; a value of 100 signalizes a neutral business sentiment. The survey-panel consists of enterprises and institutions of the financial industry and selected companies that profit from the financial sector.