Collapsed buildings, damaged factories or destroyed shipping containers: Whenever natural catastrophes or man-made disasters strike the physical damage is often devastating for companies. However, the less obvious economic impact from business interruption (BI) is often much higher than the cost of the actual physical damage and presents a growing risk to operating in an increasingly interconnected world. According to the new "Global Claims Review 2015: Business Interruption In Focus” report from Allianz Global Corporate & Specialty (AGCS), Allianz’s specialist insurer for business and industrial risks, BI now typically accounts for a much higher proportion of the overall loss than was the case 10 years ago. The average large BI property insurance claim is now in excess of €2 million (€2.2 million: US $2.4 million), which is 36 percent higher than the corresponding average property damage claim of just over €1.6 million.

In its new report, AGCS analyzes more than 1,800 large BI claims totaling over €3 billion from 68 countries for the period 2010 to 2014. AGCS participated either as lead or as co-insurer in these claims. Both severity and frequency of BI claims is increasing, which are mostly caused by non-natural hazards such as human error or technical failure rather than from natural catastrophes. The top 10 causes of BI loss account for over 90 percent of such claims by value, with fire and explosion being the top cause, accounting for 59 percent of all BI claims globally. Each fire and explosion incident analyzed averaged €1.7 million in BI costs alone.

"The growth in BI claims is fueled by increasing interdependencies between companies, the global supply chain and lean production processes," explains Chris Fischer Hirs, CEO of AGCS. "Whereas in the past a large fire or explosion may have only affected one or two companies, today, losses increasingly impact a number of companies and can even threaten whole sectors globally. With our experts researching this topic, we are well positioned to respond to this evolving risk."

As manufacturing production continues to shift to Asia, so too have large claims. There is an increasing concentration of production sites and logistics hubs in certain areas. If such clusters are hit by natural catastrophes, or by other events such as a fire or explosion – as recently happened at the Tianjin port in China – disruptive effects can quickly multiply resulting in contingent business interruption (CBI) losses around the globe: In such cases a business may be unable to operate because one of its suppliers is affected.

"BI exposures are largest for sectors with high levels of interconnectivity and technological values, as well as concentrations of risks in single locations such as automotive, semi-conductors and power and petrochemical plants," says Alexander Mack, Chief Claims Officer of AGCS. "While modern supply chains may be flexible and cost-efficient, they are also more vulnerable to disruption. CBI coverage is increasingly being seen as an essential part of today’s insurance policy for many businesses."

In the aftermath of the Tohoku earthquake and tsunami and the Thai floods in 2011, both of which produced a large number of global BI and CBI losses, companies have taken steps to reduce supply chain risks. "We observe that many global businesses are rapidly maturing in terms of BI and supply chain risk awareness and management, but there is still room for further improvement", says Volker Muench, Property Specialist, AGCS. Interdependencies between suppliers can be a big unknown and many businesses are dependent on key suppliers. Business continuity planning should not only be part of a company’s own supply chain risk management program, but should also be extended to all of its critical suppliers. It is important that supply chain management is treated as a cross-functional task involving at least functions such as procurement, logistics and finance.

Average BI losses are highest by value for claims originating from energy (€3.96 million) and property (€2.21 million) lines of insurance, followed by engineering (€0.9 million) and entertainment (€0.3 million). The cost of large energy claims has been rising, with BI now accounting for a higher proportion of loss totals, as exposures have increased due to larger onshore energy facilities and growing interdependencies between companies resulting in regional CBI claims if one plant is disrupted. At the same time BI insurance demand has risen because new buyers from Russia in particular are purchasing BI cover for the first time while existing buyers in the US and Europe are looking for higher insurance limits.

In the entertainment sector, illness or an accident of a cast member is the most prevalent cause of interruption: Injury to a major star can delay the production, leading to multi-million dollar claims. This so-called ‘cast loss’ is responsible for 60% of such claims received in the sector and almost three quarters of claims by value. The proliferation of costly visual effects in film production, which often require contractual commitments with third party specialists, can cause more expensive claims through production delays.

BI and CBI are significant drivers behind the increasing severity of very large property losses. In future, non-physical damage causes of business interruption could become more relevant, too. Perils such as cyber-attacks, political violence, strikes, pandemics and power outages could potentially cause large losses for companies without damage to property. Other non-damage events include actions taken by civil or military authority such as access restrictions or air space closure. For example, a number of losses following the Tianjin explosion are the result of subsequent interruption of flow in stock and production because the port was closed by authorities. Such losses would only be covered by emerging non-damage BI policies, which only a few companies have purchased to date but which more and more businesses are becoming interested in. 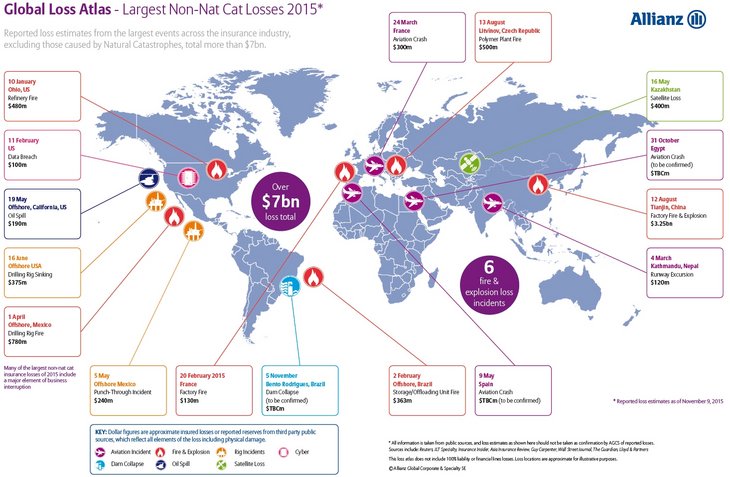